You are here: Home / Archives for Guest column 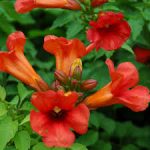 (Trumpet Vine) Got a couple letters from my articles last week – one concerning my search for the identification of a beautiful roadside bloom I saw. Hal Hurka wrote that it might be a Trumpet Vine. Says Hal, “I can’t tell from your photo if the flowers on the mystery plant are trumpet shaped or not. If they are, it is probably a Trumpet Vine or similar plant. We saw one years ago and my … END_OF_DOCUMENT_TOKEN_TO_BE_REPLACED 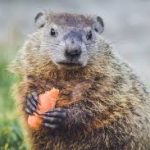 By Sherman Shifflett   (Ed Note: Farmers and backyard gardeners alike are all at the mercy of the weather, but anymore, we are also at the mercy of varmints. Here is an account of one gentleman farmer’s struggle with the thieving beasts.)   Dealing with varmints during the first six months of 2019 has been a real battle. Squirrels have been the worst. There's a Bartlett pear … END_OF_DOCUMENT_TOKEN_TO_BE_REPLACED 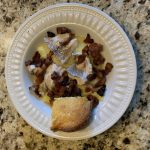 By James Friend Dickerson During a recent trip to Manteo, NC, we got skunked on a Cobia fishing trip due to using a small craft during high winds. All was not lost! A friend stopped by the house and gifted us a couple of Puppy Drum - some call it a Drum, Red Fish or Channel Bass, depending on size and location. We call it delicious, whether  for breakfast with fried potatoes or for dinner with … END_OF_DOCUMENT_TOKEN_TO_BE_REPLACED 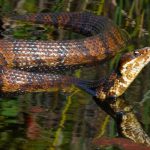 Northern Water Snake (nonvenomous). Photo credit: J.D. Willson   By J.D. Kleopfer, Herpetologist, VCDGIF Spring is here and the fishing is heating up. It’s also that time of the year when lots of other critters are heating up and becoming active. Among these critters are water snakes and cottonmouths (aka “water moccasins”). Here are some helpful tips on identification and behavior … END_OF_DOCUMENT_TOKEN_TO_BE_REPLACED 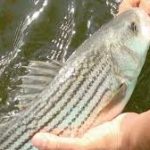 Every spring, beginning in April, striped bass by the thousands make their way from salt water up through the fresh waters of the Roanoke River for their annual spawning run.  These fish migrate to the area around Weldon, NC and provide anglers with a chance at a fishing trip of a lifetime. The stripers stay in this area throughout the month of May. The average catch will be from 20-100 per … END_OF_DOCUMENT_TOKEN_TO_BE_REPLACED 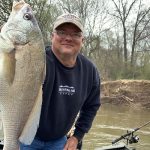 There are lots of fishermen who fish their entire lives and never catch a single citation-sized fish. There are others who will maybe land a fish or two that exceeds the minimum citation weight or length and there are a handful of anglers who catch 6 or 8 citations for different species. But there is only one in all of  Virginia who has a caught a citation fish in all 25 official categories and … END_OF_DOCUMENT_TOKEN_TO_BE_REPLACED 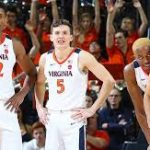 Following UVA’s stunning win over Purdue last Saturday and a subsequent invite to this week’s Final Four, I enjoyed reading this series of emails from some of my my friends, and UVA Basketball fans that go WAY back. Here’s some of the the chatter. From Sherman Shifflett: Even if you are not a UVA -Purdue game Saturday night, you have to admit it was pretty exciting. The Purdue fans, and … END_OF_DOCUMENT_TOKEN_TO_BE_REPLACED 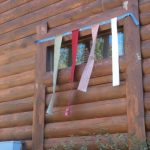 In the springtime, too often homeowners hear a “thump” against their window panes. Often, the cause was from an angry bluebird or cardinal which saw its reflection in the window and attacked. Sometimes the attacks are with such force as to kill the unsuspecting birds. Cville Buzz reader, Donald Taylor, was having this problem and rigged up what he calls, “Bluebird strips” “They seem to work,” … END_OF_DOCUMENT_TOKEN_TO_BE_REPLACED 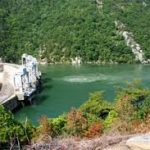 Smith Mountain Lake is a 20,600-acre lake in the Roanoke Region of Virginia, located southeast of the City of Roanoke and southwest of Lynchburg. The lake was created in 1963 by the Smith Mountain Dam impounding the Roanoke River. The lake has become a popular recreation spot and has also experienced significant development in the last decade. It is the third largest lake in Virginia, … END_OF_DOCUMENT_TOKEN_TO_BE_REPLACED

Capt. Steve Chaconas   It’s likely that below 40-degree water is gone. Every degree warm-up will encourage fish to move up from drops. Longer days will help. But what to use? Silver Buddy lures are still the best. Try the ½ ounce silver with clearer water and sunny skies, otherwise go for the gold. The smaller ¼ ounce size will also work, but water clarity is more important. Line is … END_OF_DOCUMENT_TOKEN_TO_BE_REPLACED

I am Jim Brewer, Editor of the new CvilleBuzz, a humble on-line attempt to entertain those, not only … END_OF_DOCUMENT_TOKEN_TO_BE_REPLACED