You are here: Home / Archives for Backyard Birds and Buds 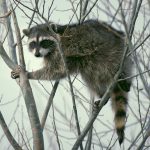 We have one of those light sensors rigged to the spotlight in our backyard. The other night, it flashed on and Nancy – ever the worry wart – got up to check it out. “Come see this,” she said, rousting me out of bed. There he was, Ricky Raccoon, clinging to our birdfeeder with sunflower hearts. Somehow, he had managed to climb over the baffle which keeps squirrels at bay, and he had … END_OF_DOCUMENT_TOKEN_TO_BE_REPLACED

Every morning, he sits on the fence beside his old bird house. Occasionally, he flits over to the house, peeks inside, then flies back to the fence. He is my lonely bluebird. Last summer, he lost his partner. The male bird and his mate had selected the house several months before they started nesting in late March. I believe they had nested in the house the previous year. They raised their … END_OF_DOCUMENT_TOKEN_TO_BE_REPLACED 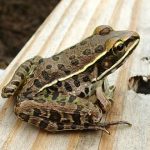 We have recently found a few snakeskins in our yard, so that meant there were snakes around. But until this week, we had not seen any. Yesterday, I heard Nancy shrieking outside, and that meant she had found the snakes. She wasn’t afraid of the snakes per se, they were harmless garter snakes, but she feared they might get our frogs and there were now two of the slimy critters in our small … END_OF_DOCUMENT_TOKEN_TO_BE_REPLACED 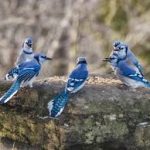 What a difference between now and last June. Earlier in the summer, birds were going nuts, chasing away real and imagined enemies, feeding and guarding the chicks and fighting for position at the feeders. Now, it’s quiet and peaceful and many birds have moved on. I heard a robin yesterday, but didn’t see him. They have largely migrated, but they’ll be back with the first extended fall … END_OF_DOCUMENT_TOKEN_TO_BE_REPLACED

Arizona has more species of hummingbirds than any other state in the United States – probably because of its proximity to Mexico, where most hummingbirds winter. Strangely, a hummingbird called a Violet Crowned Hummingbird, normally found in Arizona, may have found its way to Virginia. I was discussing hummingbirds with my friend, Wayne Ferguson, and admitted that a few weeks back I … END_OF_DOCUMENT_TOKEN_TO_BE_REPLACED

I have a pet skink. He shares my office here at Lights Out in Ruckersville. He, or a member of his clan, has been with me with four years. I see him every summer. He sneaks under a small crack below my front door. He stopped by for a visit last week and scooted across the carpet. He was casing the joint, looking for a mid-afternoon snack, maybe an ant or spider. A cricket would qualify as a … END_OF_DOCUMENT_TOKEN_TO_BE_REPLACED

Pack up all my cares and woe. Here I go, singing low Bye, bye catbird   This shows how old I am, that I would remember some of the Jerome H. Lemrick’s lyrics to Bye Bye Blackbird. It also speaks to the annual departure of one of my favorite backyard birds – the catbird. They came as scheduled this April, two catbirds, and they hung around constantly in my yard, visiting … END_OF_DOCUMENT_TOKEN_TO_BE_REPLACED 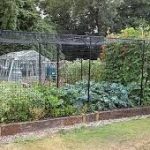 I have planted my last garden. Unless, there is a cage around and over it. By this fall, that will happen. A backyard gardener faces many obstacles. A deer can level a garden, decimate it. Likewise a single groundhog. I have had both and no longer have that problem, but I do have squirrels and they can be disruptive and extremely destructive to a garden. This summer, they have picked off my … END_OF_DOCUMENT_TOKEN_TO_BE_REPLACED

This has been a strange year for bluebirds. My bluebirds started very early.  They were on their first nest in late March. They pulled off a successful hatch, though, they had three young ones and all survived. All three have stayed in my yard since then. But almost immediately, the hen was back on the nest, then left. Later, she was back on again, and I saw one bird that fledged, then I … END_OF_DOCUMENT_TOKEN_TO_BE_REPLACED 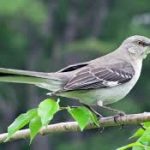 We’ve lived in our house over 45 years and there has always been one mockingbird that visits. Usually, they have nested in thick bushes in our neighbor’s yard and stop by our place only for a sip of water or when the blueberries and blackberries ripen. I feed all my other birds, but I’ve never been able to draw the local mockingbirds to my feeders, until a few weeks ago. I wrote recently about … END_OF_DOCUMENT_TOKEN_TO_BE_REPLACED

I am Jim Brewer, Editor of the new CvilleBuzz, a humble on-line attempt to entertain those, not only … END_OF_DOCUMENT_TOKEN_TO_BE_REPLACED