You are here: Home / Guest column / A Snow White Dove 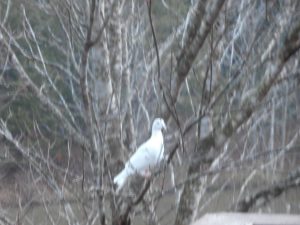 “On the wings of a snow white dove

He sends his pure, sweet love

On the wings of a dove ”

A great song recorded by Ferlin Husky, Dolly Parton and others. Don Taylor of Farmville had a visit from a snow white dove over the holidays. Don said he wasn’t sure if it was a pigeon or albino dove. He tried to get close for a picture, but he said it was very spooky. He also noted that the bird had a red band on its leg.

Don said the bird stayed in a tree near his deck for two hours, then flew to a corner peak on his roof, where it remained till dusk.

The bird looks like a dove to me, a little small for a pigeon. But the fact that it had a band may indicate a homing pigeon.

Anybody out there missing one?
Give Don a call if it’s yours.

I am Jim Brewer, Editor of the new CvilleBuzz, a humble on-line attempt to entertain those, not only … END_OF_DOCUMENT_TOKEN_TO_BE_REPLACED