You are here: Home / Boomer Memories / The Rathskeller at Chapel Hill 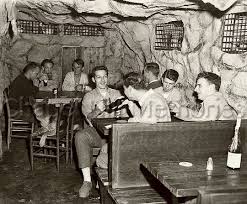 A Chapel Hill legend died in 2007 – The Rams Head Rathskeller, fondly referred to as “The Rat.”

The Rathskeller was a 4,800 square foot restaurant located beneath Franklin Street, Carolina’s version of The Corner at UVA.

To access The Rat, you walked down steep concrete stairs off Franklin Street through a place called Amber Alley. At the bottom, you waited and waited and waited. There was always a long line to get inside. If you waited only a half hour, you were lucky. On football nights, it was an hour or more before you could squeeze inside to one of several Gothic-looking rooms. Some walls were studded with rocks and stones. The ceiling had open beams. It was like eating in a wine cellar beneath a castle. There were booths in each dining area and interesting German artifacts on the walls. It was one of my favorite restaurants of all time.

My first visit to Carolina’s Rathskeller was my freshman year in 1966. I went with my roommate, Val McWhorter from Huntington. I ordered the Gambler’s Special, an amazing piece of meat.

The Gambler’s Special was a pounded skirt steak and pretty chewy, but wow, what flavor! The marinade included a menagerie of spices and a red vinaigrette. I have often tried to duplicate the rub with no success. The steak was served on a piping hot iron skillet along with fries, burnt bread and a small tossed salad. At only $4.99, it was affordable for even the most money-strapped college kids.

If your parents came to town, you took them to the Rathskeller. If you were fortunate enough to have a date, you took her to The Rat. In 1966, there were 7 guys at UNC for every one co-ed, so most dates came from out of town. W.C. – the Woman’s College in Greensboro – provided many a lonely Tarheel student with a date. W.C. is now UNC Greensboro, and somebody decided that even guys can now attend there. Too bad.

The pizza at the Rathskeller was also first class. This was back in the days before Dominos and only a very few restaurants even offered pizza. The Rat also served a delicious Lasagna and their Rib-Eye Steaks – at only $6.95 – were highly treasured.

The Gizmo Brew Works, a new restaurant and tap-room, is now opening in the old Rathskeller location at 157 E. Franklin Street, but it will never be the same. For 60 years, The Rathskeller served Carolina diners with style and grace. Haunted by the countless ghosts of patrons past, it is irreplaceable.

America’s One and Only King

I am Jim Brewer, Editor of the new CvilleBuzz, a humble on-line attempt to entertain those, not only … END_OF_DOCUMENT_TOKEN_TO_BE_REPLACED