You are here: Home / Weeds and Wildflowers / Queen Anne’s Lace 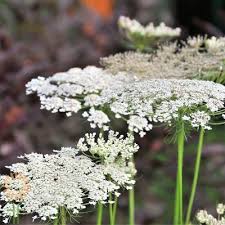 There is a stretch of sheer beauty along Route 29 just south of Ruckersville. For several hundred yards, tens of thousands of Queen Anne’s Lace plants adorn the roadside. It’s  almost as white as a January snowfall.

I wrote about  Queen Anne’s Lace last year and received many responses from others who admire this delicate plant. Some advised that the lace-like flowers could be dyed and placed in art frames.

Queen Anne’s Lace (daucus carota) is often called a wild carrot. It smells like a carrot if you pull it up. The roots are edible when the plant is very young, but it quickly gets tough and woody as it matures. The flowers are sometimes battered and fried. The leaves can also be eaten, but in small quantities. If used as a dye, the flowers give off a creamy off-white color.

The plant is often referred to as a beneficial weed, especially as a companion crop. It attracts pollinators and butterflies. It boosts tomato production when close by. It also serves as a microclimate of cooler, moister air for lettuce crops. Yet, the states of Iowa, Ohio, Michigan and Washington have deemed the plant a noxious weed and considerate it a serious pest in pasture fields.

The plant is native to Europe but was introduced and naturalized in North America several centuries ago. It derives its name – first because the white flower truly resembles lace – and second, because the red flower in the center was thought to represent a drop of blood when Queen Anne pricked herself with a needle when she was tatting lace.

Queen Anne’s Lace thrives in meadows but cannot grow in the thick fescue grasses. When you see a field of Queen Anne’s Lace, you know it’s pretty good habitat for a variety of plant and animal life.

A word of warning. Queen Anne’s Lace and the deadly Poison Hemlock are similar in appearance. Poison Hemlock is almost the exact color as its counterpart, but the flower does not have a distinct lace pattern. If you decide to eat a few “wild carrots” make sure you get the right one.

I am Jim Brewer, Editor of the new CvilleBuzz, a humble on-line attempt to entertain those, not only … END_OF_DOCUMENT_TOKEN_TO_BE_REPLACED