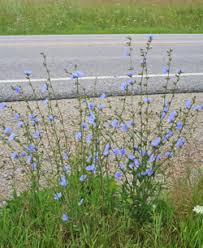 Since I noticed a butterfly weed, a brilliant orange plant growing beside the road last year, I have become more and more interested in ordinary weeds and wildflowers we often ignore. One is blooming right now, it’s common chicory, totally considered a weed and in the dandelion family.

Chicory, of course, is a name associated with coffees, and this plant can be used as a coffee substitute and as a food additive. It’s also a food source.

Wild chicory, like we see growing by the guard rails along our highways, generally has a bitter taste, but that bitterness is actually welcomed in certain cuisines – Italian and Indian, for example. In Albania, chicory is used as a spinach substitute. They simmer and marinate the leaves in olive oil. The roots may be baked or ground and inulin, an extract form chicory roots, has been used a sweetener and source of dietary fiber. When chicory is cultivated for its leaves in salads, it loses much of its bitterness.

The blue flowers need no introduction. They are bright blue and bloom from top to bottom on long, spindly stalks.

Common chicory has many names such as blue daisy, blue dandelion, blue sailors, blue weed, coffeeweed and wild endive. Chicory is certainly an interesting plant/flower and the lovely blue blooms all along our roads make a road trip a little more attractive.

I am Jim Brewer, Editor of the new CvilleBuzz, a humble on-line attempt to entertain those, not only … END_OF_DOCUMENT_TOKEN_TO_BE_REPLACED