You are here: Home / The Inflation Fighter / Buy More Hams 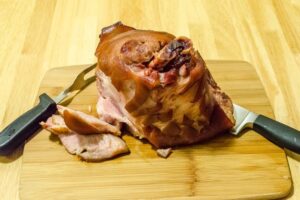 Want to really stretch your grocery budget?
The Inflation Fighter (Yours Truly) says to buy and serve more hams and the best value is often the Butt Section of a Smoked Ham.

A ham will feed an army. It’s pretty much all lean meat, it’s not fattening, and you can serve it numerous ways including as a meat for breakfast and super, duper sandwiches. It’s also reasonably priced – $1.79 a pound, sometimes less. For $15 or so, you can enjoy any number of meals.

Unless you’re feeding a lot of people at one sitting, I recommend an uncarved ham rather than a spiral. It’s stays fresher longer. Carving is a little tougher, but no big deal

Remove the ham from its packaging and place it cut side down in a roasting pan. Score the ham with a sharp knife. To score the meat carve diagonal lines into the ham to create diamond shapes. Cover the pan with aluminum foil.

Place the pan in the oven. Heat 20 minutes per pound. For example, if the ham weighs 7 lbs. it needs to warm in the oven for two hours and 20 minutes. Remove the ham from the oven 30 minutes before serving. Add a glaze if you choose and dig in.

I am Jim Brewer, Editor of the new CvilleBuzz, a humble on-line attempt to entertain those, not only … END_OF_DOCUMENT_TOKEN_TO_BE_REPLACED