You are here: Home / The Garden Spot / Three In A Row 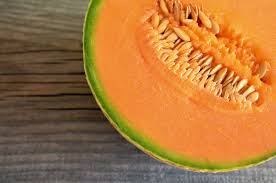 Buying an edible cantaloupe is like playing the lottery, only with worse odds. I had just about given up any hope in purchasing a tasty cantaloupe this year, no matter the store. I think they all buy them from the same farm in Mexico where they toss out any ripe, juicy cantaloupes and put only the half green, hard-as-bricks and totally tasteless ‘lopes on the trucks.

But lo’ and behold, just a few weeks ago, I saw a cantaloupe that looked like it may be ripe and it smelled like a cantaloupe, so I paid $3.99 and took my chances.

When I sliced it in half, I knew I had a good melon. It was very good.

Feeling lucky, I bought another one a few days later and it was also good. It actually tasted like a cantaloupe.

But could I make it three in a row? I had waited a couple weeks and now I tried again. Bingo! Three edible cantaloupes in a row!
I don’t understand how grocery stores can consistently pawn off tasteless melons. Sure, you could wrap up the rind, melon and seeds and return for a refund, but I think I’d rather eat a rotten melon than go through all that.

I wish a store – or a company – would wait till the melons are ripe, fly them into the states and guarantee good melons.

I would rather pay twice as much and know that I could enjoy a ripe melon, than fork over four bucks and have to toss it in the garbage.

Maybe wherever they are buying melons now has a bumper crop going. I’ll keep buying until the inevitable

By the way, if you buy one of those unborn melons, you can at least scrape out the seeds and scatter them for the squirrels. That’s something, not much, but something.

I am Jim Brewer, Editor of the new CvilleBuzz, a humble on-line attempt to entertain those, not only … END_OF_DOCUMENT_TOKEN_TO_BE_REPLACED