You are here: Home / The Garden Spot / Lots of Vines, No Beans 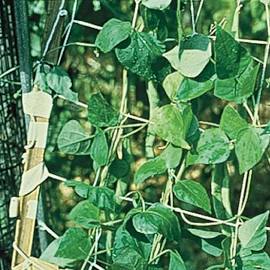 I planted four short rows of Blue Wonder Pole  beans back in May, and after keeping the rabbits away, the vines took off, reaching for the heavens. They bloomed about a month later, but no beans, then they bloomed again, but no beans.

What gives?
Sherman Shifflett in Louisa has the same problem and an agricultural agent said others are experiencing the same results. Perhaps it’s a lack of pollinators? Maybe, but it might be the heat we’ve had. I saw an article that said when the ground temperature reached 95, pole beans didn’t produce. With all that heat and sun bearing down, no wonder they stop producing.

Sometimes, pole beans come late, so I’m hoping that’s the case. My squash is late coming around, but finally starting to produce. I bet that with the recent rains and slightly cooler temperatures, we’ll start seeing some small beans. Hope so!

I am Jim Brewer, Editor of the new CvilleBuzz, a humble on-line attempt to entertain those, not only … END_OF_DOCUMENT_TOKEN_TO_BE_REPLACED