You are here: Home / Saltwater Report / Flounder On The Rebound 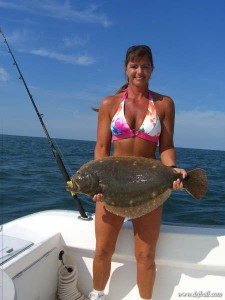 Summertime is well underway, and the saltwater fishing scene is following suit as catches escalate.

The flounder action continues to rebound from the recent stormy weather. The bite is mostly steady this week, although some days are better than others in. Plenty of keepers are available in the usual flounder spots for those willing to work for them. Anglers drifting baits near the 1st and 3rd islands of the Bridge Tunnel are lucking into some decent fish. Flatfish are also coming from the Cell, Buoy 42, Back River Reef, and Oyster. The biggest fish are hitting live bait and jigs around the structure of the CBBT. This trend should improve as the water continues to clear. Anglers fishing in Rudee and Lynnhaven Inlet are also having some decent luck with keeper flatfish pushing 20-inches, but the general size decreased this week.

Cobia are still the main target for most anglers and with good reason. Plenty of fish are around, with some respectable fish in the mix. The bite is still first-rate for both chummers and sight casters. Cobia catches are coming from all over the lower Bay, with most fish ranging from 30- to 60-pounds. The best numbers are coming from Bluefish Rock, the Inner Middle Grounds, the Nine-foot shoal, and Latimer shoal near Buoys 13 and 16, and the Baltimore Channel. Remember to remain within Bay waters to catch cobia, since Federal waters are now closed.

The Nine Foot Shoal and Latimer Shoal areas are still producing decent catches of red drum, although most drum are being caught incidentally by anglers targeting cobia. Anglers are also finding some good top-water action while throwing lures to big schools of reds meandering anywhere from the Nautilus Shoal area to off the Virginia Beach coastline.

The Virginia Beach Fishing Center reports that the Spanish mackerel bite along the Virginia Beach oceanfront really picked up this week, with one boat catching over 80 fish. Some of these fish are stretching to 24-inches. Bluefish are also hitting and are mixed in with the Spanish. Rudee Inlet is holding some decent speckled trout, croaker and smaller spot as well as bluefish.

Spadefish are gaining some traction, with some folks excited over larger fish in the schools this year. Spades continue to circle the Chesapeake Light Tower and near shore wrecks, as well as the pilings of the CBBT. Sheepshead action is still on the upswing, with several fish over 10-pounds recently boated from the CBBT complex. Big triggerfish are also active in these same areas, with some triggers pushing 4-pounds.

Amberjack are available on some offshore wrecks and at the Southern Towers, but most folks are not interested with the good tuna action happening offshore. Deep droppers are still doing well, but the escalating offshore trolling scene is also shifting interest to more blue water species. Some jumbo sea bass are mixed in with blueline tilefish, and a few decent grouper are also around.

The Virginia offshore season is going strong, with the yellowfin tuna bite still the main attraction. Boats are encountering good numbers of tuna ranging from 30- to 70-pounds, with a few nice bigeyes in the mix. Big gaffer sized Mahi-Mahi are plentiful, while a few Mako sharks are still making a showing. Billfish releases are also on the rise. Good luck to all the boats fishing the Virginia Beach Tuna Tournament this week.

Surf Fishing: Small Bluefish and Sea Mullet are scattered. The winds are ESE at 7 and the water temp is 75 degrees. There has been a quick storm here and there every day but we are still having beautiful weather on the Outer Banks. Waters are choppy, but clear.

Inshore/Nearshore Boats: The Inshore and nearshore boats are catching a tremendous numbers of Bluefish and Spanish.

The Fishing Center reported on Tuesday.

A great day of fishing with sailfish releases from Nicholas Sayler, Rachel Sayler, Evan Scocos, Brian Fisher, and Tony Sonagere. Dalton Jenkins had a 46.1-pound Mahi. Carson Jenkins landed a 209-pound Big Eye Tuna, and Donald Love weighed one at 106 pounds. Rachel Sayler boated a 40-pound wahoo. It was a busy day with lots of beautiful Bluefin, yellow-fin, black-fin, and big-eye tunas – and some gorgeous Mahi-Mahi and wahoo as well.

Near Shore boats had another great day, pulling in Spanish mackerel, bluefish, and a catch and release on a 30 pound red drum.

In-Shore boats had great amberjack catches and several cobia sightings, but no catches.

On Tuesday, Red Drum reported that Ramp 55 had some nice keeper Flounder. Ramp 44 produced some Sea Mullet, Blue Fish and a few Spanish. The North beaches and South beaches both had Sea Mullet and a few small Pompano. The sound side had Puppy Drum and some Trout.

The following day, it was Sea Mullet on Ramp 49. Ramp 55 had Flounder and a few blue Fish. James Pittman weighed a 3-2 pompano in the late afternoon Some nice Spanish came from Ramp 44 as well as bluefish.

On Wednesday, Hatteras Harbor reported that what started out as a stormy morning turned into a beautiful afternoon. Morning anglers that fished inshore had an excellent catch of Gray Trout. Gray Trout continued to bite in the afternoon and anglers also had nice catches of Speckled Trout. Spanish Mackerel fishing was excellent, as well as Red Drum bites.

Near shore anglers returned with good catches of Bluefish and Spanish Mackerel.

Offshore, anglers returned with both gaffer and bailer Dolphin. The Blackfin Tuna bite was good. No Billfish were reported.

Offshore, three Sailfish were released. Dolphin fishing was fair, a few Wahoo were caught, and some Blackfin Tuna made it to the fish boxes.

I am Jim Brewer, Editor of the new CvilleBuzz, a humble on-line attempt to entertain those, not only … END_OF_DOCUMENT_TOKEN_TO_BE_REPLACED