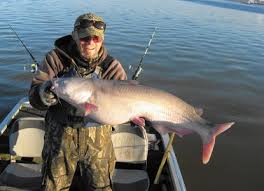 There won’t be much happening on the fishing scene for a month or two, so rather than doing a lake-by-lake or river-by-river report, we’ll single out one of the better choices for some cold weather action. First up, the lower James River.

I have always considered a catfish to be a summertime critter. Not so, for blue cats and not so on the lower James River in the Dutch Gap/Hopewell area. These big fellows – to a hundred pounds and more – feed year round. They hang in deep channels for the most part, then move up along the edges to feed. They’ll eat anything that comes near their mouths but they love shad –live, dead or cut in chunks. The serious catfishermen catch shad in advance and freeze it fort the winter, but a throw-net works well and the fresher the bait, the better.

Catfish, by the way, have a great sense of smell, but they don’t necessarily like rotten bait. They might eat a piece of nasty bait, but they would much rather have fresh bait.

Obviously, if you try your luck in the next month or two, dress accordingly and wear a floatation device. A thermal coat and bib overalls get water-logged quickly and you will sink like a rock if you fall in the water. Below is Charley Taylor’s report on recent James River action.

Excellent catfishing in the tidal sections of the river, with large blue cats reported last week. Largemouth bass action is also reported as good. Above the city, smallmouth bass action was fair to good on live minnows. Crappie fishing was excellent in the area of Dutch Gap, with 20 fish per day not at all unusual. Some of the better stringers were taken on the drop-offs along the islands in the Dutch Gap area, and in the barge pits. Live minnows and tiny jigs are the preferred baits, with lots of smallmouth bass taking the baits as well. A few walleye are caught on white grubs, bucktails and live bait above Dutch Gap.

As for saltwater, there is little to report. There have been some drum and black drum caught at Hatteras along then jetties. Most blue water boats are out trying their hand at commercial fishing, for bluefin tuna.

A warming spell this weekend might stir things up for surf fishermen.

Rockfish on the Way

How Low Can You Go?

I am Jim Brewer, Editor of the new CvilleBuzz, a humble on-line attempt to entertain those, not only … END_OF_DOCUMENT_TOKEN_TO_BE_REPLACED