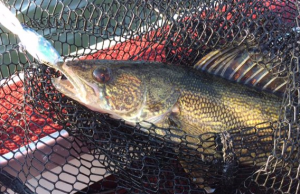 Quietly, without a lot of fanfare, Virginia has become an excellent place to catch a walleye, perhaps the best-eating freshwater fish of all. Fisheries biologists have collected adult walleye from the New River, Pigg River, Staunton River and South Holston Reservoir for the production of fingerling walleye to stock in selected lakes and rivers in Virginia. Walleye were spawned or hatched at Vic Thomas, Front Royal, King and Queen and Buller Fish Cultural Stations, raised in ponds until they are about 1.5 inches long, when they are stocked in locations across the state.

Last year, DGIF stocked 830,000 fingerling walleye. To catch a walleye in Virginia, try one of the below locations.

Central Virginia anglers hoping to catch decent walleye while fishing for multiple species should look no further than Lake Orange.  Walleye have been stocked into this northern piedmont impoundment for years and current management includes annual stockings of walleye fingerlings.  Spring 2017 surveys resulted in 27% of walleye being harvestable with a 16” average.  Anglers occasionally catch walleye in the 5-pound range.  Most walleyes are caught during the late spring and early summer by anglers fishing Lake Orange for bass, although a few anglers do specifically fish for walleyes at this location. Lake Orange is currently being stocked at 200 fish/acre (24,800) annually.

South Holston should provide excellent walleye fishing in 2018.  Sampling during 2017, including both electrofishing and gillnetting, documented an exceptional size structure with most walleye collected during the fall gillnetting in excess of 18 inches.

Walleye growth is outstanding, so anglers should find plenty of fish larger than the minimum size of 18 inches.

Flannagan Reservoir should provide good opportunities for walleye and saugeye fishing in 2018. Walleye in Flannagan Reservoir typically reach the 18-inch minimum length limit between their second and third year. However, the results of saugeye stocked in 2013 are still contributing to the fishery with most of these fish legal size.

Walleye are native to the Clinch River and are available in low densities throughout most of the river. Walleye collected in the 2017 sample ranged from 14 to 22 inches. There is currently a good number of harvestable-sized walleye with the areas of Clinchport, Fort Blackmore, and Dungannon holding the highest concentrations. Late winter and early springtime is the best time to target walleye. Walleyes often congregate in pools just below significant ledges and shoals during daylight hours, and then move into shallow water at dusk. Another good location to find walleye is where a creek enters the river.

This 108-acre lake provides anglers with a great opportunity to catch walleyes in a small lake setting, where the walleye population is stable or slightly increasing. There are good numbers of fish up to 20 inches and just enough larger ones to cause anglers to lose some sleep this summer. Walleyes up to 28 inches in length have been landed in recent years.

The bulk of the walleye/saugeye population is currently over the 18-inch minimum size limit with a few walleye in the 5-7 pound range.

Walleye are plentiful in Philpott Reservoir. Fish population surveys from 2017 showed an abundance of walleye in the 16-21 inch range. This fishery has been stable and consistent for the past ten years.

Top-water night fishing is very popular and productive in May and June, during the alewife spawn. By late June, walleye start moving into deeper water and are caught on nightcrawler harnesses and plugs trolled in deeper water. As water temperatures increase throughout the summer, walleye continue to move deeper seeking cooler water.

Currently, walleye can be found in the Shenandoah River from Warren Dam in Front Royal downstream beyond the Virginia / West Virginia state line. Although they are not as numerous in the Shenandoah as they are in other rivers, they seem to be increasing in numbers and can reach lengths exceeding 25 inches. The main source of the population prior to the annual stocking program came from stocking 285,000 fry in 2007.

Burke Lake is located in Fairfax County – a stone’s throw from Washington D.C. Anglers in pursuit of walleye can expect to find most fish in the 2 to 3 pound range, with some fish as large as 8 pounds.   An 18-inch minimum/5 per day limit is in place at Burke.

I am Jim Brewer, Editor of the new CvilleBuzz, a humble on-line attempt to entertain those, not only … END_OF_DOCUMENT_TOKEN_TO_BE_REPLACED