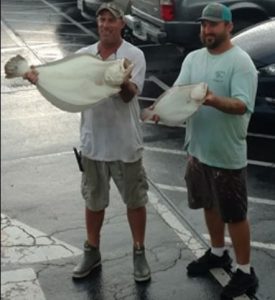 August is typically the time when big flounder start showing up at the weighing scales. The big boys, however, are  generally caught in deeper water near wrecks and structure. This week, lots and lots of 4 to 6 pound flatties were netted near the Chesapeake Bay Bridge Tunnel and The Cell, but a monster 12 pounder was landed by Capt. Brandon Cook out of Virginia Beach. Hurry down, the action is just starting.

If you like to tangle with 40 and 50 pound red drum, your ship has arrived. Massive schools of big reds are being seen feeding in the surface. Drop a lure among them and hang on. And as long as no one spooks them with an encroaching boat, they will continue to bite.
Spanish mackerel schools are still thick and the fish are growing larger by the day. Anglers are trolling Drone and Clark spoons behind line sinkers or planers. The fish are scattered from Sandbridge to Cape Henry and in the bay all the way up to Reedville. Ribbonfish are feeding in the same areas and anglers are catching them on diving plugs. King mackerel are just starting to make an appearance off Virginia Beach. A 23-pounder was weighed over the weekend.
Spadefish are hanging around the CBBT, many ocean buoys and the Light Tower. Anglers are floating fresh clam morsels to them on small hooks. When they are not aggressively feeding, chum will draw them in. Ocean structures are holding flounder, spadefish, and sea bass. The deeper wrecks hold sea bass, tilefish and grouper. Amberjack are around the towers.
The charter boats are bringing in a few yellowfin tuna, mahi, swordfish and tilefish. White and blue marlin releases are on the increase.

OBX
The hurricane slowed down the bluewater action out of Oregon Inlet, but except for one or two days, action continued in the surf and near shore.

Sea Mullet and croakers were plentiful on the northern beaches Wednesday. Croakers were also biting well in Corolla. The Little Bridge on the Nags Head/Manteo causeway reported bottom fish, trout and drum. Flounder will be in season beginning August 16th. The Nags Head piers produced Croakers,  mullet  and spot.

Nearshore boats out of Pirate’s Cove caught. Albacore, ribbonfish and Spanish. Anglers at the inlet reported trout and stripers.

The rivers were starting to produce great catches of smallmouth until the remnants of Isaias muddied the waters. More storms this Thursday and Friday could add insult to injury.

At Lake Orange, Darrell Kennedy of Angler’s Landing (540.672.3997) notes that water temperatures are in the mid to upper 80s but the crappie bite seems to be picking up in the mid lake area. Fish are being found in the 8 to 12 ft. range and they are looking for small minnows. Largemouth are schooling starting in midday. Small lures cast to the feeding bass are productive.  Catfishing remains good, with chicken liver the bait of choice. Some big catfish, however, are going for jumbo minnows. A few walleye have been caught in and around the upper-end grass beds with live bait.

Buggs Island Lake is full. Striper fishing is slow, but picking up. The fish have moved near the dam and can be found from Buoy 2 to 4, with trolling still producing the better catches. Bass fishing is slow, with most fish being caught in 10-30 feet of water, on deep diving crankbaits and Carolina-rigged plastics. Crappie are taking small minnows fished around brush piles and bridges, in 15-25 feet of water.

At Lake Anna, bass are biting well on plastic worms, grubs and jigs. Best areas are near the bridges and rip-rap areas in 15-25 feet of water and along the outside edges of willow grass beds on the upper end of the lake. Walleye fishing is fair around the deep rocky points and in the dike three area. Stripers are taking live shad, worked in 20-30 feet of water. Crappie are taking live minnows around Stubbs and Dillard’s Bridge areas in water depths of 10-15 feet.

I am Jim Brewer, Editor of the new CvilleBuzz, a humble on-line attempt to entertain those, not only … END_OF_DOCUMENT_TOKEN_TO_BE_REPLACED