You are here: Home / Outdoor Report / The Striper Bite at Buggs 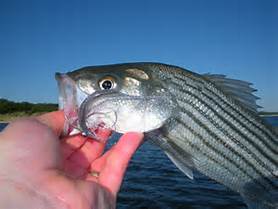 Bobcat’s in Clarksville reports that stripers are in most of the major creeks and are feeding on shad. These fish can be caught live-baiting with shad and jumbo minnows or by casting lures. Fishermen are getting good numbers, but keepers have been hard to come.

At  Angler’s Lane,  Jerry Lorre says  that smallmouth fishing in the James has been good. Fish are going for top waters and popping bugs. The water is very clear, in the upper 70s, and the level is dropping.

Anglers Lane reports that the rainbow and brown action in the Jackson is “decent”, with nymph fishing proving to be the most successful tactic. The water is low, cooling and clear. The mountain brookie streams have been too low to fish.

Harry Murray of Murray’s Fly Shop says that the larger stocked and delayed harvest streams in the Valley remain quite productive. The best action is in the deep pools below the riffles.

The water in the mountain brookie streams is very low, Harry points out, and you can easily spook the fish. So don’t get too close to the stream. Try from higher up on the bank.

Holly Grove Marina notes that the largemouth bite is picking up, as fish are becoming more active during the day. Crappie are hanging around docks and structures, and will go for minnows and jigs. The striper bite is pretty good. Fishermen are having luck with drifted shad, bucktails and deep diving plugs. Catfish are hanging around the bottom and will go for cut bait. Perch and bream can be found in the shallows and near docks, attacking red wigglers and poppers. The water is cooling, at a normal level and slightly stained.

Travis Patsell of Cats N ‘ Stripers Fishing Charters says that most stripers are in deeper water and the lower lake regions. Early and late, some schools of stripers can be found working a cove or creek in 20- to 35-feet  but they then move back to the deeper water.

The catfish bite is good in the low light hours.  Find bait and you’ll find the cats.

The white perch are really biting on small minnows, shad and night crawlers in 15- to 25-ft. of water.

Shawn Hash at Tangent Outfitters says that they are “slamming” smallies. They are attacking soft plastics, jerkbaits and top waters. Cooler weather will bring big guys to the surface. Muskies are starting to show up, with one client brining in a 40-incher. The water is 67 degrees, low and could be stained by this weekend.

Harry Murray says that both North and South forks of the Shenandoah are providing good action. The best fishing in the North Fork  from Mount Jackson to Tom’s Brook. In the South, it’s Luray to Bentonville. When fishing at dusk, stick with the tails of pools. Fish below the riffles and in the deep pools. The water is clear, at an excellent level and 74 degrees.

I am Jim Brewer, Editor of the new CvilleBuzz, a humble on-line attempt to entertain those, not only … END_OF_DOCUMENT_TOKEN_TO_BE_REPLACED