You are here: Home / Outdoor Report / The Spanish Invasion 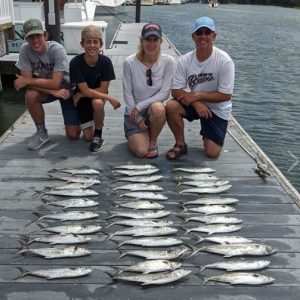 As I recall, it was about 30 years ago that Spanish mackerel first started entering the Chesapeake Bay. Considered strictly an ocean fish, the Spanish macs quietly began poking their noses past the Bay Bridge Tunnel and moved up as far as Windmill Point of the western side of the bay. It was big news at the time, and some thought it was a freak event. But now, the Spaniards enter the bay in June and venture as far as Maryland waters. The fishing for them has been nothing less than spectacular for the past two years. And it continues.

The Ocean Pearl (party pictured above) has been catching quick limits. The Spanish are biting along the oceanfront at Virginia Beach and up into the bay, especially near rip tides. Some nice fish to five pounds have been decked. And what a fish to eat! Nothing beats a fresh mackerel filet fried golden brown on a bun along with a slice of pickle, some onions, lettuce and tomato. Yummm!

The cobia action remains red hot. Some really large cobia are cruising Virginia waters Some boats are using chum lines, some are casting, but everyone is catching cobia.

Big bull red drum numbers are good this time of year. In July it’s not uncommon to find large schools feeding in the surface. Try casting bucktails to them, but just about any lure will work when they’re feeding on top. Hang on though, bull drum to over 50-inches are not uncommon.

Captain Nolan Agner from Aquaman Charters says spadefish catches have slowed a bit. Most likely because so many boats are targeting that species. If you can find an area that hasn’t been fished hard, try some fresh clam. The clam chum will keep them interested and up behind the boat.

Some nice flounder are being caught near the CBBT area. Any artificial reef is a good location to fish. Sheepshead are hanging around bridge pilings. Spot and croaker catches inside rivers are steady. Speckled trout and puppy drum are in Lynnhaven Inlet, but more pups than trout.

The Virginia blue water fleet is enjoying excellent catches of yellowfin tuna. Boats are also returning with Mahi, wahoo and bigeye tuna. Catches of blue marlin, white marlin are on the rise. There are excellent numbers of white marlin and tuna to our north, off Maryland. As these fish spread out they will soon start showing up on our docks.

Deep drop action on the Rudee Angler has been great for tilefish and sea bass. Captain Nolan, Aquaman Charters reports lots of tilefish.

Surf fishing is overall slow, but the weather has been perfect. There were some Spanish caught at the Point. Sea mullet, spot and bluefish are scattered along all the beaches.
The Little Bridge on the Nags Head/Manteo causeway reported catching trout, croaker, spot and flounder. Trout and drum fishing remains excellent back in the sound waters.

Billfish was the talk of the town among the blue water boys. There were white marlin, blue marlin and sailfish flags flying. Tilefish and sea bass were boated by bottom fisherman, along with dolphin and some yellowfin and blackfin plus a couple of Wahoo.

Stan Cobb at Greentop says things seem to have slowed a bit on the freshwater side. Good catches continue to occur on Lake Anna, however, for stripers. Early morning action has been better, particularly with live bait. Fishing live shad or herring at specific depths with diving planers above the marked schools of fish gets multiple strikes. Guides who specialize in this very method are reporting consistently good catches.
This is common on Kerr Lake also. Many guides are hooking up with quality bass as they, too, are following the schools of baitfish. This may be the reason for the tougher fishing for bass in local reservoirs. Nomadic baitfish sometimes pull bass away from cover, taking away ambush points that bass fishermen target. Often, timing decides success or failure. Being near the cover when the baitfish are present can be all it takes.
Catches of 12-15-lbs have been the average winning weights for evening and morning tournaments on Anna. Over the weekend, the winning weights at Kerr were 18-lbs. on Saturday and 16-lbs. on Sunday. Shallower areas rather than deeper area have been more productive. Topwater baits have been good around shoal areas and shoreline grass.
There have been numerous tournaments on the Potomac River lately with anglers struggling to catch limits and quality fish. Bass fishing has been better on the Rappahannock River, as opposed to the Potomac, and even the James.
The Chickahominy River remains a stronghold for bass. Quality catches of occur almost daily, but the number of large tournaments on the Chick has declined. Make no mistake, the Chick can produce trophy bass on any given day, especially when the metabolism of fish is at its height and drives them to more frequent feeding.
Capitalize on early mornings and late afternoons/evenings, as the low light conditions trigger increased feeding. The upper James is a great option for the smallmouth and flathead catfish. Buzzbaits and other topwater baits are  outstanding for smallmouth right now. The Shenandoah has been producing some huge largemouth.
At Lake Orange, Darrell Kennedy of Angler’s Landing (540.672.3997) notes that water temperatures are in the mid to upper eighties. The largemouth bass are starting to school up and chase bait fish in 10’ to 12′ of water. Top waters and hard crank baits seem to be working best to entice the bass bite. Crappie are holding strong to brush in 8’to 10′ depths, and are being caught on small minnows. Walleye are hanging around rocky areas with night crawlers the best bet. Some nice catfish have been caught with chicken livers throughout the lake, but the mid lake region seems to have the highest concentration of fish.

I am Jim Brewer, Editor of the new CvilleBuzz, a humble on-line attempt to entertain those, not only … END_OF_DOCUMENT_TOKEN_TO_BE_REPLACED