You are here: Home / Articles From the Past / South River Update 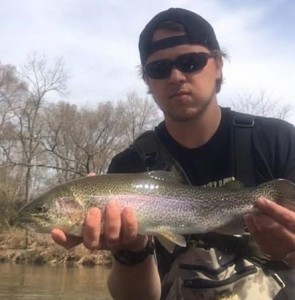 Fishing has been steady on the South River with caddis and midges hatching most days. Lots of nice trout are being caught on the Catch and Release Area near Downtown Waynesboro.  The Missing Link caddis dry and the amber Arlies’ Gnarly Larva have been go to patterns. Above is a picture of Ian Hall with nice Rainbow from Downtown this week.

Water levels continue to be low all over the area. Brook trout streams are extremely low for this time of the year. Anglers on these streams need to keep in mind that these fish are under extra stress due to the low conditions and should be handled carefully or left alone until conditions improve.

Josh Hall & Matt Martin didn’t let a chilly day interfere with their fishing success at a Lake Anna tournament last Saturday. The team finished first with a whopping 25.73-pound bag of bass and won the big fish pot with a 9.44-pound lunker. Anna is the place to be now if you’re a bass fisherman.

Bitter cold and high winds kept us away from the river last week. But, bass feeding is already in motion.

Water temperatures dropped from nearly 60 down to around 40. A significant warm up this week and longer days combined with shorter nights will warm water, faster.

Find the warmest water and try to either stimulate feeding or reaction bites. The perfect middle of this road is a suspending Lucky Craft Pointer 78 jerkbait. Work clown patterns on Gamma Edge Fluorocarbon line with long pauses. Vary the force of twitches to present both an easy meal and a reaction bite. Lipless crankbaits like the Lucky Craft LV RTO on 10 pound Edge can be crawled along the bottom, over grass and through wood. Vary this presentation too by popping or ripping out of cover to bring reaction strikes.

Capt. Art Conway of Conway’s River Rat Guide Service (804-746-2475) out of  Ed Allen’s Boats and Bait reported that Chickahominy Lake mid-day water temperatures were in the low to mid 50’s in the main lake and mid to high  50’s in the major creeks on Wednesday.

The crappie bite continues strong. Most crappie have vacated the creeks and were along drop-offs and in channels in the main lake, especially near wood cover, but should soon return to channels in the  major creeks. The crappie were scattered rather than in large schools, and  many appeared inactive. Active crappie, mostly uplake, were hitting  live minnows, Wright Bait Co. and Southern Pro curlytail jigs. Small to medium  yellow perch (some still egg-laden) and white perch were scattered or in  loose aggregates on some main lake flats and channels and in some creek channels and were hitting live minnows, small swim baits, and small jigs.

Wind, cold and nasty conditions equal no fishing report for last week. Things should improve dramatically by this weekend.

Croakers will soon make an appearance in commercial nets as they work their way up the bay and into rivers like the James, York, Rappahannock and Potomac.

Capt. Reese Stecher of Beach Bum Fishing says the stripers are beginning to show in force with the warmer weather. There are plenty to catch if you are willing to make the drive to Albemarle Sound. Stecher fished there for the first time last Saturday and caught lots of small fish. Larger stripers should be showing up shortly. The local bridges (Mann’s, Manteo, Currituck) should also be productive any day.

Reese said there are scattered red drum moving in and out of Oregon Inlet. There are also lots of dog sharks off the beaches – fun to catch on light tackle. Sea bass and tautogs are on the wrecks. Call (252)-449-0232 to book a trip.

The most recent report out of Oregon Inlet was last Friday when the off-shore boats enjoyed some serious battles with the Bluefins, landing a couple to make for some world class sushi.

Now, for the one that got away. One angler locked into a 6-hour stand-up fight with an estimated 600-pound Bluefin on a spinning rod. When the beast broke the line, the drag was set at 50-pounds.

It reached 73 degrees on Tuesday and everyone was out on the beach fishing. Nice Toads and small Flounder were caught at the Point. Ramp 43 had some Toads, Small Flounder, and Black Drum. The weekend coming up starting Friday is going to be gorgeous. Great for Fishing. We will have Fresh Mullet at Red Drum & Tackle

No boats sailed out of Hatteras due to inclement weather.

I am Jim Brewer, Editor of the new CvilleBuzz, a humble on-line attempt to entertain those, not only … END_OF_DOCUMENT_TOKEN_TO_BE_REPLACED