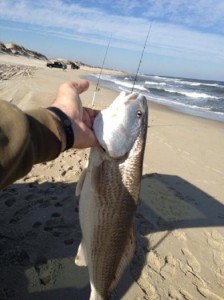 The only thing fishing in the Chesapeake Bay last week was a pelican. There was nothing to report on the Virginia front, but from the Outer Banks someone actually went fishing and caught something

Red Drum & Tackle in Buxton reports that an angler fishing at The Point caught keeper drum with every cast while using shrimp for bait and a 6-ounce sinker. He was out there by himself slaying them! Last weekend at Hatteras, Red Drum reported that some Speckled Trout and Puppy Drum were caught at Ramp 43. The water temperature – before the storm – was between 52 and 55 degrees.

Nothing was happening at Nags Head except for dogfish – sharks. They will bite no matter how cold.

There is not a lot to report this week as far as freshwater fishing is concerned because it’s hard to fish when you can’t get out of the driveway. The good news in all this snow is that it will help fill underwater ground tables and get us well into spring in case rainfall is sparse.

In the meantime, check out Capt. Steve’s advice below on preparing for spring and also be ready to do a little trout fishing when the banks are cleared. Fish should be well dispersed and there will be plenty of them.

Forget going out this week. Ramps are frozen. Most fishing spots are frozen, and it’s still very cold. The water temperature is 32 degrees, as cold as it can get! No more snow is in the forecast, but it’s still cold with temperatures just above freezing and into the 40s mid week. Overnight lows in the teens to around freezing. The weekend will warm into the 40s and get near 50.

Plenty of winter fishing ahead, so get ready. Once water warms to 38, fish will bite again. Winter fish mouths are tough and bites are light. Sharpest hooks are best. Quality hooks on ball head and shaky head jigs are important. Use a sharpening stone or replace them with Mustad Ultra Point round bend trebles. Changing hooks on dulled Lucky Craft Pointer trebles is a good idea. Same with Silver Buddy lures.

Get a good fishing map from GMCO maps and mark winter areas, deep water close to shallow water in out of the current areas, so you will be ready for the coming thaw!

Capt. Art Conway out of Ed Allen’s Boats and Bait reported that Chickahominy Lake mid-day water temperatures were in the high 30’s in the main lake this Wednesday Most of the lower lake was open water, but some bays and most creeks were still ice-covered. The lake level was a few inches above the top of the dam. The water was medium brown and clear in the central lower lake.

From Angler’s Lane, (434) 385-0200, www.anglerslane.com, Tom Reisdorf says that he has had no word on smallmouths in the James. He has heard of a few anglers getting lucky with muskies. No word on rainbows or browns in the Jackson, where the water is clear, in the 40s and somewhat high. Brookie fishing was really good before the snow, but now the mountain streams are very hard to get to. Be very careful if you try.

Contributed by Captain Forest Pressnell. The Upper New River is freezing up and almost solid. Regardless, as we get into February and March when the river opens up it will be walleye time and we are looking for some giants to be caught this year. Remember to wear your PFD at this time of year when you are on the water and give someone your agenda of where you will be fishing and when you expect to be back. Give us a call to book a walleye trip or an early spring smallie adventure. For information go to www.newrivercharter.com

Contributed by local guide Richie Hughes, owner of New River Trips LLC, newrivertrips@gmail.com. “We got 10 to 18 inches of snow in the “Top New” watershed. There is some ice in the trout streams, but not too bad. Less than 3 months from now we will be getting into some great pre spawn smallmouth fishing. Make your plans now.  Stay warm and safe.   Check out newrivertrips.com for trip info.

I am Jim Brewer, Editor of the new CvilleBuzz, a humble on-line attempt to entertain those, not only … END_OF_DOCUMENT_TOKEN_TO_BE_REPLACED