You are here: Home / Outdoor Report / Lots of Options! 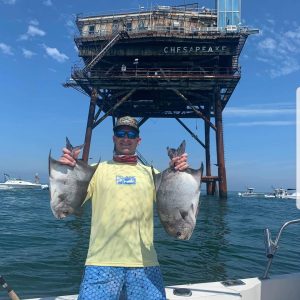 There are certainly plenty of options for Virginia saltwater anglers.

Capt. Jake Beck from. Knot Wish’n Charters says, “Summer is here, water temps are cool in the morning and warm to 75 in the afternoon. The Spanish bite is in full effect and lots cobia and red drum are migrating north.”

Both cobia and drum are available throughout the lower bay. The cobia action is outstanding. They are being caught from the Chesapeake Bay Bridge Tunnel to Windmill Point. Catches are also coming from the oceanfront just offshore. Anglers are chumming and sight casting. Sight casting is the method for more encounters. Anglers fishing the bottom with cut bait are picking up the trophy red drum. The area around the Bridge Tunnel Islands and the Eastern Shore shoals are hot spots.

Spadefish and sheepshead are on structure now. Most of the big spades are coming from the Chesapeake Light Tower. Sheepshead are hanging around bridge pilings. Look for both these fish to begin to concentrate at the Bay Bridge Tunnel and The Cell. Eight-pounds, by the way, is the minimum size for a state trophy recognition citation spade fish.

Flounder action is improving up inside the bay. Large flounder are showing up near the bridge tunnel. There have been some catches coming from inside Rudee and Lynnhaven Inlets as well.

Virginia’s offshore tuna season is picking up. Yellowfin and bigeye tuna catches are showing up on local docks.Capt. David Wright and. crew on the High Hopes  landed a really nice 121-pound big eye tuna Saturday. To the south, Carolina boats have found schools of yellow fin and big eye tuna mixed, busting the surface. There have also been some good tuna catches reported to our north by boats fishing from Ocean City, MD. So now Virginia captains will have to decide which way to run each morning. Look for dolphin catches to pick up soon.

The surf is providing pompano, bluefish, black drum and sea mullet. There have been some large sharks landed in the Nags Head and Hatteras surf. There are still some big drum around Hatteras.

Offshore boats have been limiting early on tuna with a lots of big eye tuna in the mix.

Inshore boats are trolling and catching blues and large Spanish mackerel to 6 pounds. Sheepshead and puppy drum are available in the sound and near bridges.

Congratulations to Pelagic Hunter II on being the second outboard boat to ever win the 62nd annual Big Rock Blue Marlin Tournament. Their 495.2-pound marlin topped the leaderboard.

At Lake Orange, Darrell Kennedy of Angler’s Landing (540.672.3997) notes that water temperatures are in the low to mid-eighties. The lake is stained with fish in the post spawn mode. Bass are feeding up on small bait fish, soft plastics seem to be the bait of choice, with top waters in low light periods of the day. Crappie are in the 8-12 ft. range feeding on small minnows. Several nice walleye have been caught on live bait in the mid lake region. The catfish bite has really picked up in the last couple of weeks, as they’re getting ready to do their spawn run, with some nice stringers being caught on night crawlers and live minnows.

Kerr Lake is returning to normal levels, now at 303.51 feet. Many are reporting catching plenty of bass around 2 lbs. by flipping and pitching to the flooded bushes.

The bigger fish have been eluding anglers. Mid-June is typically a great topwater time along with crankbaits  that dive in the 10′ range. Brush piles can still be good, but rocky areas will often attract the larger bass. One must simply explore to solve the puzzle.

Over the weekend at Anna, a 23 lb., 5-fish limit took the top honors in a tournament out of Sturgeon Creek Marina. Topwater baits and deep crankbaits were thrown by many, along with plastics.

Crappie have returned to bridge areas, but these areas see a lot of traffic, making fishing difficult after 10 am. This is why many of the horsepower-restricted lakes are more productive. The pleasure boat traffic does not exist in these lakes. However, Swift Creek Reservoir sees a lot of pontoon boat traffic, even though it is an electric motor only lake. The fishing on Swift Creek, though, can be outstanding.

The tidal rivers are attracting a good amount of bass anglers as summer patterns emerge. Many of the bass are still in the creeks and shallow areas, making them aggressive. Look for strong weights to emerge from this weekend’s tournaments. As with the lakes, many presentations are working. Soft plastics, topwaters, crankbaits, and Senkos get a lot of attention.

Many may run to the Chickahominy River, where heavy vegetation exists to facilitate a grass frog bite. The Rappahannock River is fishing very well for bass. Many report that bass there are still in the creeks there.

The upper James is at normal level and color at the moment, but the mid-week rains will change the current conditions. Hopefully, the river will not rise greatly. The early morning and late evening topwater bite has been great. Dragging small, soft plastics on the bottom is taking good fish as well. The Super Fluke is very good for whitewater areas below rapids. These are excellent ambush areas for bass.

Dam areas are good almost any time, but especially when warm temps are present. Boshers Dam and Williams Dam are two prime examples.

Shad On The Run

I am Jim Brewer, Editor of the new CvilleBuzz, a humble on-line attempt to entertain those, not only … END_OF_DOCUMENT_TOKEN_TO_BE_REPLACED