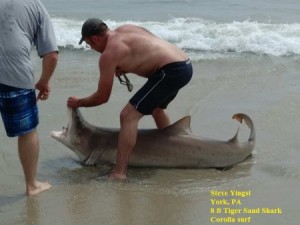 Heading to the Outer Banks? Come on in, the water is fine. At least that’s what the sharks say. This 8 foot Tiger Sand Shark was beached by a lucky (?) angler recently at Corolla. Hmmm!

Maybe the pool at the hotel would be a better place to take a dip.

As for fishing, it’s been good.

TW’s says it was cloudy out, but hot, waves 1 to 2 feet this Wednesday with a water temp of yes 77 degrees.

Surf fishermen caught mostly mullet and croaker along with some spot. A large school of bluefish was sighted in Corolla, where the sharks were. Pier action was pretty much the same. Avalon had some Spanish at the end of the pier, bluefish, mullet, croakers, spot and other assorted fish. Nearshore boats picked up Spanish, blues and kings. Some good drum were caught on the inside along with mullet, croakers.

An amazing day on Wednesday. Limits of Mahi and yellow-fin were coming out of the fish boxes and onto the docks! Anglers also released some billfish and earned themselves a trophy citations. Congrats to

Anglers near-shore had excellent catches of Spanish macs and king macs on both trips! Some boats had near limits.

Anglers in-shore had some very nice speckled trout caught on light tackle and fly rods. There were also catches of drum and some catch and release of drum.

Anglers on the Miss Oregon Inlet Headboat had some good fishing, as well. Some nice fish coming over the rails included grey trout, croaker, sea mullet, puffers, pinfish, and pigfish.

In the surf, fishing was really good on Ramp 38 on Wednesday. There were plenty of Sea Mullet, Pompano, and Blue Fish. The Point had lots of sharks. Sound fishing has been good for Puppy Drum and Trout with some nice Flounder every now and then.

Inshore boats out of Hatteras Harbor stayed busy with citation size Red Drum as well as puppy Drum in the morning. Spanish Mackerel fishing was good Wednesday morning but slowed down that afternoon. The Bluefish bite was good in the morning! This afternoon one group of anglers went bow fishing and had a great time shooting Stingrays with a bow and arrow! It was a slick calm day offshore except for a few rainsqualls.

One Blue Marlin was released by Tuna Duck and Native Son released a Sailfish. Several Sailfish were released by other boats from different marinas in the area. Dolphin fishing was good with both bailers and gaffers reported. The Blackfin Tuna bite was excellent today. A few Amberjack were boated as well.

Cobia fishing remains very good for both sight fishing and chumming. Chummers have a lot of sharks to deal with while the sight-casters are at the mercy of the weather. Both are catching plenty of cobia. The Marine Patrol is checking for the required cobia permit and VMRC is checking to make sure that anglers are reporting their cobia trips.

Amberjack are at the southern towers along with spadefish and some cobia. Cobia is closed in federal waters and there have been mixed reports on the amberjack bite. Some days they are more aggressive than others with most of the jacks being on the small size. There has been a good summertime bluefin tuna bite on the Fingers with 100-pound class fish. There are some wahoo and dolphin in that area as well. Yellowfin and the occasional bigeye tuna have been mostly found near the edge. More billfish are showing up. Bottom fishing is producing good catches of tilefish with both big blueline and golden tilefish being caught.

Start the topwater approach with a Lucky Craft G-Splash 80. This is a larger popper and presents a bigger target for higher tides. Also the Lucky Craft walking Gunfish will create enough commotion to bring fish up. When fishing over heavier grass, use GAMMA Torque braid: 20 pound test for spinning gear and 30 to 50 for casting reels.  Find a cadence that works, Pauses can trigger strikes. Allow the bait to sit for about 10 seconds to see if this is what they want.

After the tide falls, it’s time to tie on a hollow frog to 60-pound Torque braid. Tie a double Palomar knot to keep the braid from slipping into the hook eye gap. . White frogs have been working, but switch to black when it’s really cloudy. Work the bait across thick and matted grass. Pause around holes.

Mann’s Baby 1_minus in firetiger is great to cover water when the topwater bite slows. It comes though grass really well. Either use braid or 14 pound test Gamma Edge fluorocarbon line. Change the hooks when dulled to Mustad KVD short shank triple grips. I also paint the bellies of this bait orange!  As the tie gets to low, pitch Mizmo tubes Texas rigged with a 3/0 Mustad Mega Bite hook on a 3/16 ounce pegged weigh to grass edges. Look for grass points and holes. Use 16-pound test Gamma Edge fluorocarbon line. Green pumpkin patterns work best.

Contributed by Darrell Kennedy of Anglers Landing  (540.672.3997). The water temperature is in the mid 80s and stained. Bass are schooling in low light periods and killing top water baits.  Soft plastic baits worked slowly during mid day, will also attract the bass bite. Crappie are being caught on small minnows and jigs around the fishing pier and deep brush. A few walleye have been caught on nightcrawlers and minnows worked along rocky areas down lake toward the dam. Catfish are feeding on chicken livers and live bait.  Some nice bream have been caught on red wigglers in shallow, rocky areas

Capt. Art Conway of Conway’s River Rat Guide Service (804-746-2475) out of Ed Allen’s Boats and Bait reported that Chickahominy Lake mid-day water temperatures were in the mid 80’s in the main lake and in the major creeks on Wednesday.

I am Jim Brewer, Editor of the new CvilleBuzz, a humble on-line attempt to entertain those, not only … END_OF_DOCUMENT_TOKEN_TO_BE_REPLACED