You are here: Home / Outdoor Report / Blues, Flounder and Specks 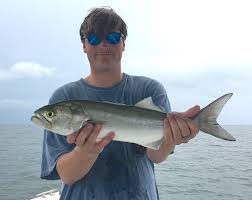 Flounder, speckled trout and bluefish are starting to bite inside local inlets. There have been keeper size specks caught in Rudee Inlet this week. The best flounder catches will come from Wachapreague, Oyster and Chincoteague on the Eastern Shore. Flounder should be showing along the CBBT. Numbers will continue to improve as the water warms.

Tautog fishing remains good to excellent. Look for them around underwater obstructions like wrecks, reefs, rocks and the pylons of the CBBT. The Virginia season closes May 15th, so you need to go ASAP! The taugtog state record was set in 2012, a 24 lb., 3 oz fish caught by Ken Neill.

Red drum are on the shoals at the mouth of the bay, Latimer Shoal and the shallow bar near the north end of the CBBT. Next month as the water warms and the number of fish increases, anglers will begin having success sight casting near the islands of the CBBT.

There have been very few black drum reports. But they should be along the shallow channel ledge running from Fisherman’s Island to north of Cape Charles. Look for boats anchored close together near Kiptopeake, the Cabbage Patch and the Concrete Ships.

It’s time for sheepshead to arrive in the bay. Their numbers will increase in May and peak in early June. The best baits are fiddler crabs or mole crabs, fished very close to structure.

Sea bass, blueline tilefish, golden tilefish, snowy grouper, black belly rose fish and dogfish are available this time of year to Virginia offshore deep droppers. Make sure to keep up with seasonal regulations for each. In June the Rudee head boats start offering 17-hour deep drop trips on Thursdays and daily half day inshore trips. There will be pent-up demand, so book early.

Trout fishing is good in the sound and along the beach as far north as Kitty Hawk. A few puppy drum are being caught with the trout in the sound.

Surf fishing on the northern beaches is good with blues, sea mullet, toads and trout available.

Down south on Hatteras Island anglers are catching plenty of sea mullet, blues and toads. Some nice big reds are being caught at the point in Buxton.

Offshore slowed a little this week, a few yellowfin and few blackfin tuna were caught. It’s time for dolphin to start showing up.

The rivers were looking good, until it rained all the rain we had. There is no more rain. We ran out and the rivers are largely unfishable, except for tidal stretches of the James, Chick and others. Stripers, by the way are all over the Chickahominy, but the season is closed.

Bass are finishing up the spawn at Lake Anna and are very aggressive. Most all lures are working now. Striper action is  also good around Stubbs Bridge and Rose Valley. Some big catfish are taking cut bait and chicken livers.

At Lake Gaston, bass are shallow on main lake points. Stripers are hitting well, especially uplake. Sunfish are on the beds.

The water levels at Buggs Island are about 305, moving bass back in the bushes. White bass are busting baits at dusk and stripers are looking for trolled Redfins in 10 to15 foot depths. It’s all about stripers at Smith Mountain,  Some. 20-pounders have been taking live shad in the Keys area and at the dam. Crappie are gobbling live minnows in shallow water.

Deer Season Off To a Bang

Stripers In The Chick

I am Jim Brewer, Editor of the new CvilleBuzz, a humble on-line attempt to entertain those, not only … END_OF_DOCUMENT_TOKEN_TO_BE_REPLACED