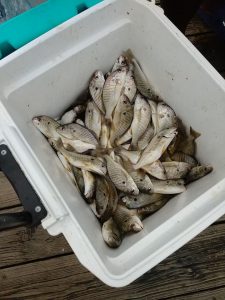 This could end up as one of the best seasons for spot in recent memory. For starters, the tasty panfish showed up early this year, in June. Whereas September is usually the prime month for spot, it could be August this year. Small croaker and spot are currently found throughout the lower bay and in the tidal rivers. Anglers fishing at the Virginia Beach Piers and along the beach are catching lots of spot, roundheads and blues.
Anglers trolling close to Virginia Beach have been catching bluefish, some huge Spanish mackerel and ribbonfish. Captain Todd Beck, Knot Wish’n charters says many citation size (4-lbs.) Spanish mackerel were caught this week. King mackerel have been spotted skying and a few have been landed. Nice catches of flounder are coming from along CBBT, inside inlets, around the Hampton Bar and Back Reef. Team East Coast Leisure won the 10th Annual Virginia Beach Flounder Tournament this past weekend.
Red drum and cobia can be found throughout the lower bay and many anglers are sight-casting for them. Captain Beck said schools of bull reds have made frequently appearances on the surface this week. He said many of the cobia on the buoys willing to take a bait are undersized.
Black drum can be found around the islands of the CBBT. Spades and triggers are available on inshore structure especially along the Chesapeake Bay Bridge-Tunnel and at The Cell off the Eastern Shore. Sheepshead action is also good in the same locations. Speckled trout and puppy drum are in all southside inlets, the Elizabeth, Lafayette and Back rivers.

Virginia Offshore
Tuna, dolphin, shark and billfish are available to offshore trollers. When offshore, Captain David Wright on the High Hopes, like others, has been trolling early and then deep-dropping for swords, tilefish, grouper, rosefish, and sea bass.
Offshore wrecks and navigation structures are holding the wreck donkeys – amberjack.
The Virginia Beach Tuna tournament is scheduled for this week. Weigh stations will be set up at Long Bay Pointe Marina and the Virginia Beach Fishing Center.  The captains meeting will be live streamed on Wednesday and the weigh-ins Thursday – Saturday. http://vbtuna.com/
The Virginia Beach Invitational Marlin Tournament took place this past weekend out of Rudee Inlet. Fishing started off slow but picked up. Anglers ended the tournament with 105 total releases (98 whites, 4 blues, 3 sails). The total payout was $92,355.

In the surf, Hatteras Island reports some scattered Spanish and bluefish on Wednesday along with black drum and croakers. The piers produced blues, sea mullet, spot and croakers. There are lots of croakers biting. And kids are having a ball on the piers.
Nearshore boats hauled in Spanish, bluefish, albacore, ribbonfish and moonfish. There are lots of trout and puppy drum in the sounds. All boats are coming home early with limits of tilefish. There were also a few blue marlin releases.

At Hatteras Harbor, boats were kept in port mid-week, but Monday anglers had catches of wahoo, dolphin, and blackfin tuna. Bottom fishing was also good for snappers, triggers, and amberjack. Bite Me released a sailfish. Inshore anglers had limits of keeper size red drum, Spanish and bluefish.

The best bass action has been in the tidal rivers – the James, Rapp and Chickahominy. Small crank baits and topwater frogs have been consistently putting fish in live wells.

Two to five pound bass have been biting in Smith Mountain, Buggs and Anna. Striper fishing remains very good at Anna and parts of Buggs. Catfish are biting everywhere. Crappie are deeper than deep in most impoundments. Smallmouth are on fire in the upper James, the New and the Shenandoah rivers.

At Lake Orange, Darrell Kennedy of Angler’s Landing (540.672.3997) says the water temperature is in the upper 80s and the lake is slightly stained with some serious schooling action taking place.  Bass and crappie are hitting on small bait fish throughout the lake. Walleye can be caught on live minnows and night crawlers on rocky points. Low light periods are best for largemouth bass using top waters, while in the middle of the day soft plastics seemed to work best. Catishing remains strong throughout the lake with chicken livers and live minnows for bait.

Check Out the South River

I am Jim Brewer, Editor of the new CvilleBuzz, a humble on-line attempt to entertain those, not only … END_OF_DOCUMENT_TOKEN_TO_BE_REPLACED