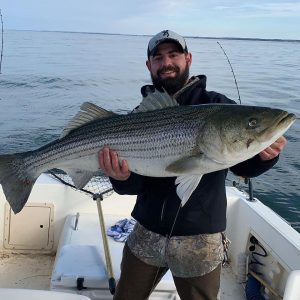 Large rockfish are moving out of bay tributaries and into the Bay. Look for them on the Eastern side of the Bay. Anglers are drifting or slow trolling eels near the Plantation Light and along Cape Charles. Mann’s Stretch 25’s and tandem rigs are also effective. School-sized rockfish are available for anglers casting along the bridge pilings and the artificial islands of the CBBT.

Tautog are still available on structure, but the bay water temperature has dropped to 49 degrees. Ocean wrecks will probably produce best now. Fiddler crabs and quartered blue crabs are the preferred baits.

Jumbo sea bass are available on many ocean wrecks. Sea bass become off limits at the end of the year, when the season closes. Some big bluefish could show near the same structures. Flounder can also be found around offshore structures. Fresh strip baits best for flounder. This is also the time of year boats are on the lookout for rolling bluefin tuna. They have been off the Morehead City North Carolina coast for several weeks.

When boats can make it out to deep drop, they are finding good numbers of tilefish and sea bass.

Offshore, when weather permits, the tuna and king mackerel fishing has been excellent. Look for giant bluefins to start showing up off Hatteras any time.

Stan Cobb of Greentop notes that 17 lbs. won a bass tournament held on the Chickahominy River over the past weekend. Chatterbaits, jigs, jerkbaits, and silver buddies are working now. Some of these baits are working on the James, but the shallow to mid-depth crankbaits perform better on the lower James. The river level at the Westham gauge along the upper James is 4.56′. Jerkbaits, jigs, and crawfish-crankbaits, are tops along the upper James. Eighteen pounds won this week’s winter series out of Sturgeon Creek Marina. The Crappie bite has been good, but few are fishing. Water temps on Anna have ranged from 42- 53 degrees. The stripers have been hit or miss lately. The upper portions of the lake have been much more consistent. The elevation at Kerr is currently 298.32′. Anglers have been reporting good catches of bass with deeper cranks. The 10-20 ft. range has been the most productive, providing contact is being made with rock cover and brush/stumps.

I am Jim Brewer, Editor of the new CvilleBuzz, a humble on-line attempt to entertain those, not only … END_OF_DOCUMENT_TOKEN_TO_BE_REPLACED