You are here: Home / On Golden Pond / Pond Events 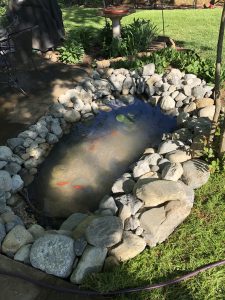 Last Saturday, the pond had been dug, the liner was in place, the pump chugged away and the landscape rocks had been laid. The only thing missing in our new backyard pond was fish.

So we popped a bottle of Prosecco and introduced our 8 pet goldfish to their new home.

“Call them by name. when you put them in the pond,” I suggested.

Of all our pet goldfish, only two have names. One is Whitey and the other White Lips. Guess why? The rest all look alike, except for their tails.

We both wondered what these goldfish must be thinking.  For basically all their lives they have lived in a black, 35-gallon tub with a pump and a small decorative piece on the bottom, and now they have their own pond.

I had bought a dozen goldfish minnows, no bigger than an inch, about five years ago. I used 4 for bait, didn’t catch a thing, but then decided to keep the remaining minnows in Nancy’s Lily Pond, for later use.

That idea was quickly nixed as Nancy fed and cared for the goldfish orphans. The fish cost me exactly one dollar for the original dozen. Koi fish can cost hundreds of dollars, but they are no more lovely than our common goldfish.

Three of the fish have exquisite tails, long, flowing and elegant. The others have shorter tails. I wonder if the long tailed fish might be males. I asked them, but they wouldn’t say. A trade secret, I suppose.

We have enjoyed the pool every afternoon as Nancy feeds the fish and they swim to the top to graze.

My bullfrog tadpoles are in the other pond and I haven’t been able to catch them, yet. I may just leave them there and catch or buy some new ones. After all, this is not only a goldfish pond, it’s also my frog pond.

Now We Have Black Goldfish

I am Jim Brewer, Editor of the new CvilleBuzz, a humble on-line attempt to entertain those, not only … END_OF_DOCUMENT_TOKEN_TO_BE_REPLACED