You are here: Home / Now We're Cooking / The Fly That Changed My Life 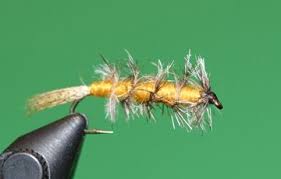 When I moved to Charlottesville in 1967, I had done some fly fishing, but nothing serious. I had caught some smallmouth and redeyes on a popping bug in the Greenbrier River and I  frequently put a worm on a hook at the end of my fly rod and caught stocked trout. But I never had any luck catching trout on a genuine trout fly. That is, until I met Chuck Kraft.

Chuck ran a sport’s shop in the Barrack’s Road Shopping Center, just down from Leggett’s where I worked.

One weekend, a friend, Barry Mawyer, asked me to go with him on a fishing trip to the Tye River and Barry was an accomplished fly fishermen.

“Go see Chuck Kraft and buy some flies,” Barry said. So I did.

Chuck was like a gruff old troll. He sort of growled when he spoke and his words were short and to the point.

I asked Chuck about flies for the Tye River and he said,  “All you need are a few C.K. Nymphs.”
The C.K. part was named after Chuck Kraft himself, who tied and designed the flies.

I was skeptical to say the least. The flies were stubby little things that didn’t look like any bug I had ever seen, but Chuck didn’t tie flies to catch fishermen, he tied flies that would catch fish.  He thought like a fish, and he knew exactly what it took to fool a fish.

Chuck’s C.K. Nymph was an imitation of a stonefly common to the Tye and other rivers. He was super sensitive about exact colors. He searched high and low for just the right shade of yellow yarn for his C.K. nymphs. He wanted the color to exactly match the yellow bellies of certain stone flies.

Armed with a half dozen C.K. nymphs (they were 75c each), Barry and I headed for the Tye River.

By mid-morning, I had thrashed about the stream, losing three of my precious flies to tree limbs before I finally managed to shoot one of Chuck’s C.K. Nymphs to the head of a pool.  The fly never came back. I set the hook on a 10-inch native brook trout, and then – full of confidence – I soon caught my limit. On Monday morning, I was back at Chuck’s Fly Shop for more ammunition.

The problem I encountered was that even though the flies were only two for a buck-fifty, I was losing them rapidly and figured that the only way I could afford to continue to fly fish was to tie the flies myself. So I set about learning how to tie a simple C.K. Nymph with a piece of wool yarn, a size 8 hook, a bit of wood duck for the tail and a long, grizzly hackle.

My love and enjoyment of fly fishing became such that I decided to open a small fly shop. Chuck’s Sport Shop was long gone and at that time there was no place in Charlottesville to buy even a decent fly box, much less a C.K. Nymph.

Not long after that, I joined Trout Unlimited and began writing their newsletters. I discovered then that writing is what I most enjoyed and wanted to do.

An opening popped up for an outdoor writer at the local paper and I guess they were desperate. I applied and they hired me. Since then, I have written for several papers and magazines and published my own Virginia Outdoor Weekly, The Virginia Sportsman as well as my current CvilleBuzz. I figure I have written over 10,000 articles in the last 40 years. And it all really started soon after I met Chuck Kraft.

Chuck passed away last week. He was a legend larger than life, perhaps the finest fishermen that ever lived and a fine man, to boot. We will miss him.

I am Jim Brewer, Editor of the new CvilleBuzz, a humble on-line attempt to entertain those, not only … END_OF_DOCUMENT_TOKEN_TO_BE_REPLACED