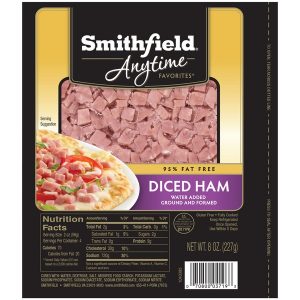 One of the fun things about cooking is just using what you may have on hand in the fridge or cupboard and having it come out well. Sometimes, as my wife Nancy will attest, my experiments are not successful, but I pulled one off last week.

I had two packs of Smithfield Diced Ham that I had purchased in order to make omelets for our gang at Urbanna. But my omelets got bumped, so I still had the ham cubes. I was in the mood for some Mac & Cheese that night, and ham goes with Mac & Cheese. So why not? I’d just slip the ham in with the Mac & Cheese. How bad could it be? Actually, it turned out very well.

I made a batch of Mac & Cheese as I always do, stirred in the ham cubes, baked it for a half hour and it was about as good of a comfort food dish as you can make.

Here’s how I do my Mac & Cheese with the new addition.

I boil one box of elbow macaroni about 10 minutes, remove, put in a colander and rinse with cold water. The sauce is the secret. I add two tablespoons of flour to a cup of Half & Half (milk works, too) and stir well until dissolved. Next I melt a stick of butter in a saucepan, and then add the flour/milk concoction. Next, I mix a pound of cheddar cheese cubes (you can use shredded cheddar, but I prefer the whole cheese). Once mixed, I pour the milk, flour and butter over the Mac & Cheese, mix in two packs (8 oz. each) of ham cubes, salt and pepper to taste (don’t forget that step), bake in a 350 oven for about 30 minutes and dig in. It’s an easy, filling and very tasty entrée,

I am Jim Brewer, Editor of the new CvilleBuzz, a humble on-line attempt to entertain those, not only … END_OF_DOCUMENT_TOKEN_TO_BE_REPLACED