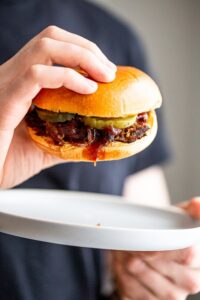 My late friend Bev Kokatos loved Venison BBQ. Back when I owned Jim’s Fly & Tackle, we would occasionally put a venison roast in a crock pot and dish out sandwiches for our customers. One day, Bev stopped by for something and smelled the BBQ and asked what I was cooking. I gave her a sandwich and she was smitten. She said anytime I ever cooked BBQ to call her, she was quite taken with venison BBQ. It’s good and I enjoy it, but last week I made a batch that was the best BBQ I believe I’ve ever had. Even Nancy liked it, and that says a lot. My son had given me a roast earlier. He and my grandson, James, belong to a hunt club outside Atlanta and have an almost endless supply of venison. I told him I wanted more.

Here’s the recipe I used.

Start with a 3- or 4-pound roast – shoulder, ham, whatever. Don’t, however, waste a tenderloin with BBQ. It’s good by itself, cooked medium rare on the grill.

Trim any fat or gristle from the meat. Unlike, beef, deer fat isn’t good. It’s bitter. I seared the roast on all sides in a little olive oil until it had a nice, brown crust. transferred it to a crock pot early that morning. Like 8 o’clock in the morning. You want it to cook all day.

Cover the roast with 1 sliced onion, 3 or 4 cloves of minced garlic, 1 C of Sweet Baby Ray’s BBQ Sauce, half of a beer (drink the other half), 1 T cider vinegar, 2 T Dijon mustard, S & P, and turn the slow cooker on low. By dinner time, the roast will be fall-apart tender. Pull it apart and shred, add a little more Sweet Baby Ray’s sauce and pile it on a bun with dill pickles. If there is better Venison BBQ, I haven’t had it.

I am Jim Brewer, Editor of the new CvilleBuzz, a humble on-line attempt to entertain those, not only … END_OF_DOCUMENT_TOKEN_TO_BE_REPLACED