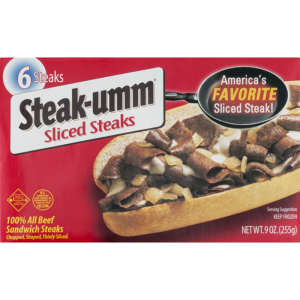 I was strolling through the bakery department at Kroger’s this week and saw a package of Martin’s Hoagie Rolls that caught my eye. They looked very fresh and they were a perfect size for a hoagie – a little longer and not so stubby as most. So I bought them and then wondered what I would have with the rolls.

Hey, a Philly Cheese Steak sandwich sounded good. All I needed was a fresh onion, a bag of shredded mozzarella and a pack of Steak-umms. Yes, Steak-umms, one of the most versatile and tastiest meats in the freezer department. Keep a pack of frozen Steak-umms handy and you’re ready for almost any beef recipe, including soups, tacos, stir fries, Philly Cheese Steaks and one of my favorites – a French Dip.

Steak-umm has been around since 1968, developed in Philadelphia as a household choice for cheese steaks. Steak-umm was created after putting beef through a grinder multiple times, mixing and molding it, freezing it, softening it, then ultimately slicing it. The delicious flavor was achieved by blending the trimmings from prime cuts – such as rib-eyes, filets and tenderloins, then emulsifying the meats and slicing them razor thin.

Steak-umms, as we all know, cook practically as soon as they hit the skillet with just a speck of olive oil. Flip them once, put them aside until the entire batch is done. Then, generously pile the steaks on a bun (try these Martin Rolls, they are sensational), add mozzarella, mayo, sautéed onions (peppers optional), put the sandwich in a 400 oven for a few minutes and you are biting into one of the tastiest sandwiches ever – a Philly Cheese Steak Sandwich. Some like Cheese Whiz on their sandwiches, but I think mozzarella is a better compliment to the Steak-umms.

If you haven’t cooked with Steak-umms in a while, pick up a pack, stick it in the freezer and whip up some great sandwiches the next time you’re in the mood.

I am Jim Brewer, Editor of the new CvilleBuzz, a humble on-line attempt to entertain those, not only … END_OF_DOCUMENT_TOKEN_TO_BE_REPLACED