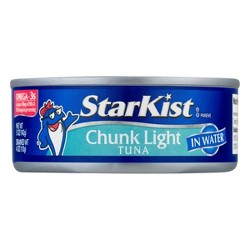 On that fateful day in March when I thought Governor Ralphie might close all the grocery stores, I closed up shop early, headed for the closest grocery store and bought nearly every non-perishable in sight. Since then, I have been chipping away at my “emergency” stash in the basement and have slightly reduced my inventory, though I have no idea what I will do with those 8 cans of fruit cocktail, much less the 1 gallon container of coffee creamer.

This week I was rummaging through my mini-mart and found three large cans of tuna fish. I was in the mood for some tuna salad, but noticed that all the cans were “packed in water”,  not oil. Recently, I have been scouring the shelves for albacore tuna packed in olive oil – great flavor. I find tuna packed in water to be tasteless, but I reluctantly brought two of the cans up from the basement to make a batch of tuna salad. How bad could it be?

I put the cans on the counter beside my ever-present bottle of extra virgin olive oil. I looked at the tuna, then the olive oil, then the tuna and then it struck me. Why not put some olive oil in my tuna fish! It’s amazing what a great mind can achieve – given the time, of course.

I opened each of the large cans (12 ounces) and squeezed every possible drop of water from the tuna fish. Then, I added two teaspoons of olive oil, mixed it up, sampled it and it tasted exactly like tuna packed in oil, only better. The olive oil really brought out the flavor. Next I chopped up three hard boiled eggs, added 3 tablespoons of dill relish and about 2/3 cup of mayo. I often use onions for smaller batches, but since I was making 20-ounces of tuna fish salad, I skipped the raw onions which would become stronger tasting over time and sprinkled just a tad of onion powder along with kosher salt and pepper. After several hours in the refrigerator, I pulled out the tuna salad, made myself a sandwich and it was among the best I have ever eaten. No longer will I be irritated with all those cans of tuna packed in water. I’ll just add the olive oil myself! It’s really good. Try it.

2 12-oz. cans of tuna packed in oil (bought on impulse at beginning of pandemic)

I am Jim Brewer, Editor of the new CvilleBuzz, a humble on-line attempt to entertain those, not only … END_OF_DOCUMENT_TOKEN_TO_BE_REPLACED