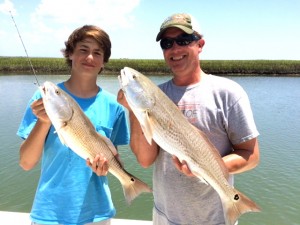 James Brewer, III went with his son, James, on a Topsail Sound excursion with Capt. Jim Crisco and had good results with red drum. They put four in the boat up to 29-inches; two were keepers. They also broke off a big black drum. Topsail Sound, a fairly shallow-water estuary, offers hot action for drum, flounder and specks. Just offshore, there is good fishing for blues, Spanish and sea bass. Topsail Beach is about 12 miles north of Wrightsville Beach along the southern North Carolina coast.

The cobia have made their way up into the bay, says Capt. Dick Whitehill (misskarenscharterfishing.com). Early this week, Capt. Whitehill boated several undersize cobia at Windmill Bar and broke off a couple larger fish. He was also catching lots of sharks. The croakers are still hungry and plentiful. The spring/summer rockfish season is over.

Cobia fishing is excellent. Big brown fish are being caught in good numbers and sizes by both chumming and sight-fishing methods. Fish are being caught from New Point Comfort on out to the ocean. Sight-fishing is good along the edge of the Baltimore Channel and at the mouth of the bay. Chummers are anchoring on all of the hills and shoals. York Spit has been cobia central lately.

Flounder fishing is improving in the bay. They are still being caught inside the seaside inlets of the Eastern Shore, but the bay bite is now coming alive. The York River has been producing some good flatfish catches. Fish are being caught at the CBBT, in the Hampton Bar area, 36A, Back River Reef, and in the Bluefish Rock area.

Spanish mackerel are showing up along the oceanfront and in the lower bay. Some big kings have also been reported. With this hot weather, tarpon will be arriving on the Eastern Shore, but it may be July before we hear of the first catches. Amberjack are at the southern towers.

Offshore action is good along the 100-fathom curve. Everyone is catching dolphin and yellowfin tuna catches are good. A few big-eye tuna continue to be caught. Some wahoo and billfish are around also, so basically it’s a good mixed-bag fishery going on right now.

In the Sound, the Little Bridge on the Nags Head/Manteo causeway reported small Spot, Croaker and throwback trout.

Near shore boats are bringing in plenty of Spanish and Bluefish. Also Kings, Amberjacks and Albacore were caught. Inshore boats reported Flounder, Mullet and Croaker.

Offshore, the Bluewater fleet found the big Yellowfin on Tuesday. The Tuna fishing was good and there were several citations. There were also gaffer Dolphin caught and Billfish releases.

On Tuesday, Ramp 43 had nice Sea Mullet, some Blue Fish, and Spanish in the morning. Avon Pier had Sea Mullet and Spanish. Ramp 55 had some Pompano and Sea Mullet. Behind the Motels, it was Blue Fish, Puppy Drum, and Flounder.

Capt. Dave Wilson said that – for the record – it was HOT on Wednesday June 18. “However, it was calm, and calm trumps anything I would have to complain about. Fishing was a little scrappy but we got lucky with a few schools of dolphin and wound up with a great catch. Near the end of the day we put the icing on the cake with a 52-pound wahoo.”

“On Tuesday, the wind was out of the north, which cooled things down slightly. It also streaked out the grass, which made it a little difficult to fish. We found a few schools of dolphin, but they weren’t as cooperative as we wished. Still, we stuck with it and scrapped out a nice catch.”

I am Jim Brewer, Editor of the new CvilleBuzz, a humble on-line attempt to entertain those, not only … END_OF_DOCUMENT_TOKEN_TO_BE_REPLACED