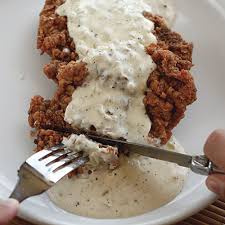 I had some really good Chicken Fried Steak at Mrs. Rowe’s in Staunton a few weeks back and thought I’d try my hand at it. In the past, I’ve attempted Chicken Fried Steaks with round steaks – pounded into oblivion – and they were still tough and chewy. Recently, I saw a cut called “Sizzling Steaks”. They were at Wal-Mart – 6 or 7 thinly sliced chuck steaks in a package. I knew chuck had a great flavor and I figured these steaks would be tender enough without pounding or a with marinade, so I gave it a shot.

They were excellent – packed  full of flavor, tender and the pepper gravy topped off a “company worthy” dish.

It’s a pretty simple recipe. For two people, use 4 of the thin chuck steaks. Pat dry, then dredge through flour (I used House Autry Chicken Breader), then dip in a milk/egg wash, then back in the flour and into a hot skillet with a little olive oil. Brown quickly on each side (just a minute or two) and remove from the pan and keep warm.

For the gravy, buy a mix of pepper gravy – it’s much easier and just as good as a “from scratch” gravy”.

Mix the contents in  ½ cup of cold water, stir thoroughly and add to 1 cup of  boiling water. Cut back to simmer and let thicken for about five minutes. Pour it over the Chicken Fried Steaks and serve. I really like this recipe better than with round steaks. Try it for a quick mid-week meal.

Olive oil to cover the skillet

Tautog Bite is On

I am Jim Brewer, Editor of the new CvilleBuzz, a humble on-line attempt to entertain those, not only … END_OF_DOCUMENT_TOKEN_TO_BE_REPLACED