You are here: Home / Neat Stuff / LouAna – Simply The Best 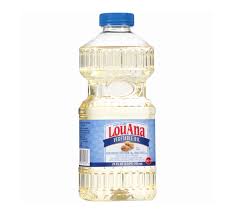 We were out of town and I had cooking duties and needed some vegetable oil. But I didn’t need much, certainly not a gallon. In the cooking oil section at the top of the shelf, I saw a small 16-oz. bottle of LouAna Vegetable Oil. Mom used to use that oil in our house years ago, so I bought the small jar.

As I poured a bit in the frying pan, I noticed and remembered that the oil is quite clear. It added a marvelous flavor to my dish and I have since looked for it in local grocery stores. Kroger’s does not carry the Vegetable Oil, but Food Lion does. LouAna is simply the best there is.

The Louisiana company has been around a while – since 1894 to be exact. They are famous for their Peanut Oil, but over the years have added classics such as LouAna Vegetable Oil, Canola Oil and Safflower Oil as well as special blends such as Liquid Coconut Oil and Avocado Oil. With a smoking point of 450 degrees, LouAna oil can take the heat, plus it has a clean flavor profile that won’t affect the taste of your favorite foods.

While other cooking oils seem heavy and often overpowering, LouAna is delicate and terrific as the oil in a vinegar and oil cruet.

For those who fry turkeys, there is no better product on the market than LouAna Peanut Oil.

Look for it next time you need cooking oil. It’s the best.

I am Jim Brewer, Editor of the new CvilleBuzz, a humble on-line attempt to entertain those, not only … END_OF_DOCUMENT_TOKEN_TO_BE_REPLACED