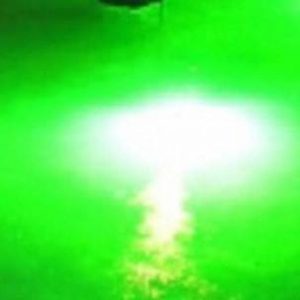 I had heard about the ability of underwater lights to attract fish at night, but I was skeptical. Nonetheless, I ordered one from Berkley last year before the Oyster Festival. We dropped the neon green light at the base of the dock and it drew lots of bait, but not any gamefish. They simply weren’t around.

This year, I tried again, this time with much success. The first night drew lots of minnows and small crabs and a large school of white bass. I caught three nice ones, and several smaller ones, plus some undersized stripers in about 30 minutes.

The next night I tried again and, again it worked. The schools of minnows were so thick you could barely see beneath them. I caught stripers every cast. Unfortunately, they were undersized stripers, not the big boys I had hoped for.

The Berkley Magnum Submersible Light uses 1,000 lumen green LED lights that penetrate deeply to attract fish. It is submersible to 20 feet and attracts fish from as far away as 100 feet and more. It can be charged in house or attached to a deep cycle battery. It can be used in fresh or saltwater.

I intend to try it for crappies at Lake Orange next spring and again at Urbanna next year. If there are any fish anywhere around, they will come.

If you like to catch fish and have an available boat, dock or pier, try one of these lights. A good one – from Berkley – runs about a hundred bucks. They really work.

It’s Kosher: Salt That Is

I am Jim Brewer, Editor of the new CvilleBuzz, a humble on-line attempt to entertain those, not only … END_OF_DOCUMENT_TOKEN_TO_BE_REPLACED