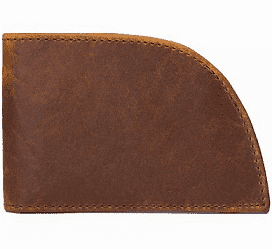 For Christmas this year, Nancy gave me a new billfold. It’s supposed to fit in your front pocket. It’s thinner than a cell phone, nice and compact, and it indeed fits in a front pocket. But how in the world was I supposed to put all my stuff in that tiny wallet?

My current wallet is much like that of George Costanza on Seinfeld. It has more stuff inside than a sixth grader’s school backpack. When I put it in my pocket, I look like Quasimodo with the hump on my ass.

For starters, maybe if I took out the stuff that I didn’t absolutely have to have with me, I could at least then have a travel wallet.

So I began to sort through the contents.

I found a football schedule of the Beckley, WV Flying Eagles Football Team for 1952. I guess I could take that out. Then, I came across a 1983 Out-Of-State Big Game License for Pennsylvania. Probably won’t need that anymore. What’s this? A dry cleaner’s receipt for November 2016? So that’s where my raincoat is!

I found three credit cards that had expired between 2008 and 2016. There was a note to call Bill Tanner about something, whoever Bill Tanner is. There was a library card in case I ever went to a library. I’m not sure there is such a thing any more. I found a stick of petrified chewing gum, a 1989 raffle ticket for a shotgun, a folded lunch menu to the local Chinese restaurant, a key to something, and VIP cards to four grocery stores and two drug stores– that you no longer need with a phone number.

After some much needed housecleaning, I was able to put my new, slimmer wallet in my front pocket and fly to the Dallas Lighting Show last week. I had everything I needed and no more Quasimodo butt.

Fellows, I highly recommend a new front pocket wallet! With just a little bit of selective engineering, they really work!

I am Jim Brewer, Editor of the new CvilleBuzz, a humble on-line attempt to entertain those, not only … END_OF_DOCUMENT_TOKEN_TO_BE_REPLACED