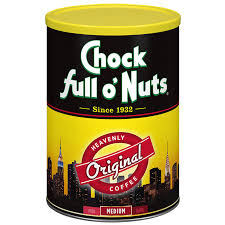 Nancy and I bounce around from coffee to coffee. We like many brands including Folgers, Dunkin’ Donuts, and several store brands, but we have recently found ourselves drinking Chock full o’Nuts on a daily basis. Nancy goes to a morning gym class and has enjoyed the coffee served there. When she asked about it, they said it was Chock full o’Nuts. Our daughter Laura heard that Mimi enjoyed this brand and gave her two large cans for her birthday. We are now hooked on an American coffee that dates back to the Great Depression years.

Chock full o’Nuts originated from a chain of New York City coffee shops.The unusual name came from the 18 nut shops that founder William Black established under that banner in 1926. When the Great Depression struck, he converted the nut shops to lunch counters, serving a cup of coffee and a sandwich for a nickel. The brand Chock full o’Nuts grew in popularity  and was introduced to supermarkets in 1953. The great Dodger baseball star, Jackie Robinson, becamethe company’s vice president and director of personnel after his retirement.

In September 2010, the company announced it was returning to the lunch counter business by opening its first store in almost 30 years, on West 23rd Street between Broadway and 6th Avenue in Manhattan. Today, Chock full o’Nutsis owned by coffee giant Massimo Zanetti Beverage Group, the largest privately held firm in the industry. The single cup variation is called K-Cup.

It’s hard to describe the taste of coffee. It’s like describing the color blue. But Chock full o’Nuts is very rich in flavor with no bitterness or lingering after taste, if that makes sense. It smells heavenly out of the can and while brewing. It’s just plain, good coffee.

(Not So) Neat Stuff

I am Jim Brewer, Editor of the new CvilleBuzz, a humble on-line attempt to entertain those, not only … END_OF_DOCUMENT_TOKEN_TO_BE_REPLACED