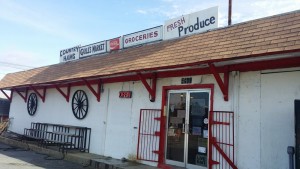 I used to spend lots of time fishing Mossy Creek, near Bridgewater in Augusta County. My drive over the Blue Ridge Mountains via Rt. 33 took me through Elkton, McGayheesville and Penn Laird before I turned off on Rt. 256, a bypass around Harrisonburg and a shortcut to Bridgewater.

On one trip home, after a great evening fishing the sulphur hatch at Mossy, I was ravenous. I stopped in a little country store at Penn Laird called Gayle’s Market, expecting nothing more than maybe some chips or nabs. Entering, I was overwhelmed with an enticing and familiar scent, that of country hams. Beside the register was a stack of ham sandwiches. There must have been 25 or 30. I figured if they had that many on display, they must be good, and I love country ham. I think they were a buck at the time so I bought one and a Coke and had a bite of the sandwich in the parking lot. Immediately, I went back in the store and bought three more, another for that evening and two for lunch the next day. Since that time, if I have the opportunity, I stop by Gayle’s Market on any trip involving Rt. 33.

Gayle’s has a little history behind it. Opened some 46 years ago, the owner, Gayle Cupp, intended his operation to be a gas station that sold country hams. It turns out that it became a country ham store that used to sell gasoline.

I chatted once with Gayle, and asked about his hams, why they were so good. He explained that his hams came primarily from one hog farm in North Carolina. He bought only the best and his hams are truly unequaled in Virginia – and that includes Kite’s and Turner hams. Gayle’s hams are also far less expensive than the competition.

In addition to hams and ham sandwiches, the store somehow finds the best, freshest produce on the market. I picked up a cantaloupe just last week that Gayle Jr. (Gayle, Sr. recently passed away) recommended and it was the best I’ve had this year.

Gayle’s also sells local cheeses and even seafood – steamed crabs and oysters in season. They used to have a handmade sign on the highway, “3 dozen eggs for 99-cents” but I haven’t seen that in a while. I once bought three-dozen of their eggs. They were small, fresh eggs packed in a single tray carton and they were very good. Gayle’s also makes and sells decadent fried pies if your diet allows.

Too often, these old places die out, but I don’t see that happening to Gayle’s Market. They have built a solid business offering terrific food at good prices and with wonderful service.

If you get a chance, stop by and pay Gayle’s a visit. Strike up a conversation, ask about their fresh breads and produce, and for goodness sake, sample some of the best country ham in Virginia.

I am Jim Brewer, Editor of the new CvilleBuzz, a humble on-line attempt to entertain those, not only … END_OF_DOCUMENT_TOKEN_TO_BE_REPLACED