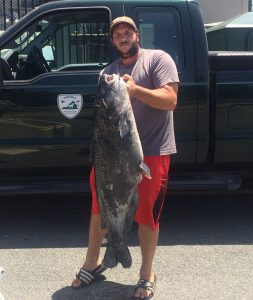 On June 29, Lindy Rowles drew back his bow and sent an arrow towards a submerged target – a 52 ½ pound blue catfish and he managed to pull it in. The Game Department just certified the big cat as a state record for bow fishing. But this cat was just a baby as far as blue catfish are concerned. The overall record weighed an astonishing 143 pounds, boated by Nick Anderson in Buggs Island Lake back in 2011. Anderson released his catch. Who knows what it weighs now?

But pulling in a 50-pound catfish on that simple reel attached to a bow is no easy matter. A nice shot, a successful capture and a very big fish.

Lucky Buck Runs Out of Luck

I am Jim Brewer, Editor of the new CvilleBuzz, a humble on-line attempt to entertain those, not only … END_OF_DOCUMENT_TOKEN_TO_BE_REPLACED