You are here: Home / Hawaii / A Birthday Marlin 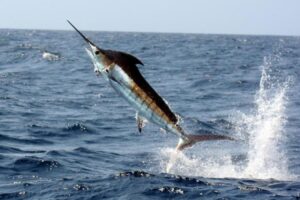 What do you want for your birthday this year?
Let me see. How about a deep-sea fishing trip for blue marlin off the coast of Hawaii?

Sometimes you get what you ask for.

On November 30, my – uhm – 39th birthday, I went fishing out of Kona, Hawaii, the Blue Marlin Capitol of the World. Nancy had arranged my special trip through Norwegian and I joined 2 couples from Montreal aboard a 45-foot Viking charter boat. We shoved off at 8 AM and had our lines in the water by 8:15. On the southwest side of the Big Island, jutting sharply into the Pacific, you don’t have to take a long boat ride to find the Gulf Stream. It’s all “Gulf Stream”, even a few hundred yards from shore. That’s because it’s always warm water here and the ocean bottom drops quickly to 1,000 feet, then 2,000, and then 3,000 feet. The steep ledges and abundance of baitfish off Kona draw billfish, tuna, Wahoo and Mahi and they are year-round residents.

My newfound friends and I exchanged pleasantries and decided which of the 5 rods would be manned by which fishermen. We then sat back and took in the natural beauty of Kona from the sea. From the boat’s deck you could see the coffee farms, fruit orchards and farmlands. Mauna Loa towered above it all, shrouded in smoke. It was stunning.

About 45 minutes into our trip, one of Shimano 130 reels   screamed in terror as the line shot from the spool like Usain Bolt at the bark of the starting pistol. Hundreds of yards of line vanished from the reel before Sonia could strap herself in the fighting chair.  To the port side, we first saw him, a massive display of silver and blue. The great fish thrashed in the surface, then sent water in every direction with three dramatic leaps in an effort to shake the hook. The hook set held, then the big blue marlin plunged to the bottom. The battle was on.

Sonia tired quickly in the all-out war of attrition and relinquished her seat in the fighting chair. It was now a team effort. Five fishermen, a captain and mate and a pair of 250 hp Yamaha motors against one 350-pound blue marlin. It was a pretty even match.

Foot by foot, inch by inch, the stolen line was returned to the spool, the mate snagged to leader and guided the 10-foot fish to the side of the boat. The captain carefully grabbed the fish’s bill, dislodged the hook, and set the tired warrior free. Our valiant foe sank slowly from view and back to his native waters,

Thanks, Mr. Blue Marlin, for a birthday to remember. Next time, leave those gaudy lures chugging in the surface alone, and I think he will.

I am Jim Brewer, Editor of the new CvilleBuzz, a humble on-line attempt to entertain those, not only … END_OF_DOCUMENT_TOKEN_TO_BE_REPLACED