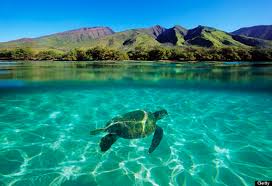 We were sipping our first cup of coffee on our private deck at sunrise. Through the gray haze across the water, we could see three boats. They were fishing. With my binoculars, I could see men at the rear of the boat and outriggers. Soon, a fourth boat joined them. The boats huddled for a few minutes, and then the fourth boat sped away. I assumed that the three fishing boats had transferred their catch of tuna fish and it was off to the market.

Today, we have anchored off the coast of Kona, a one-time, small fishing village on The Big Island, but now a booming metropolis of agriculture and tourism.

One of the many options for recreation aboard the Pride of America Hawaiian cruise ship was a deep sea fishing trip here in Kona. I declined. I felt reasonably sure that the captain of our ship would not want me dragging tuna fish back to my room, and what’s the purpose of going tuna fishing if you can’t clean and cook your catch? Rather than catching fish, we would be observing them from our tour on a glass-bottomed boat.

Our ship had docked a mile offshore, since there were no deep-water piers on Kona and we took tender boats from the ship to shore. Our first adventure was aboard the glass-bottom boat to explore the local coral reefs and we didn’t have to go far. The coral beds and millions of its occupants were right on the shoreline. Coral, it seems, needs a solid base and what better than lava to anchor a base.

The water along the shore was as clear as a shot of Stoli’s Vodka, largely due to the heavy influx of fresh water from underground springs popping up at the edge of the ocean. In spots, the water was 50 degrees. It was cold, but extremely clear. We saw all sorts of plant and sea life that looked like it belonged in a saltwater aquarium. There were lots of little yellow tang fish and blue ones as well. We passed across a school of at least 10,000 foot-long baitfish – don’t know their names but several flounder and grouper were gorging on the stragglers.

We also discovered that Hawaii has the tallest mountains in the world, since up to 14,000 feet can be above ground and nearly that many feet beneath the ocean. The average depth of the Pacific around the islands is 16,000 feet. That’s about three miles!

After the boat ride, we once again bumped into a local tour guide who escorted about 10 of us though the Kona countryside. We saw avocado farms, Hawaiian lime trees, coconut, banana, breadfruit and papaya tees, plus plumeria trees and African Tulips and others whose names I can’t remember.

And, of course, we saw and toured several coffee plantations. Kona is famous for its coffee. The smallish bushes begin growing at about 500 feet above sea level and are grown as high up the mountains as 10,000 feet. The coffee bushes bear fruit three times a year and must be picked by hand. Some of the plantations were hundreds of acres but there are numerous family farms of 6 and 7 acres that grow coffee between the lava rocks along the hillsides.

After molten lava has set, plant life will appear within 30 days, and in a few years, what was once a field of black rocks will be covered in green.

There were numerous plumeria trees, some in groves on farms. The plumeria produces the flowery petals from which the garlands of leis are made. We also learned that the wild parrots on the Big Island are drawn to the African Tulip trees where they sip the water from the blooms. Another plant growing wild is Nuni, a health plant, which is said to help prevent cancer and cure many ailments. The extracted juice from Nuni is now exported worldwide.

It was a day of education, quite informative. We also ran into a local fisherman who had been out that morning and had put three 60-pound yellowfin tuna on ice. He caught then one mile offshore. Maybe I should have gone fishing after all!

I am Jim Brewer, Editor of the new CvilleBuzz, a humble on-line attempt to entertain those, not only … END_OF_DOCUMENT_TOKEN_TO_BE_REPLACED