You are here: Home / Guest column / Backstrap for the Family 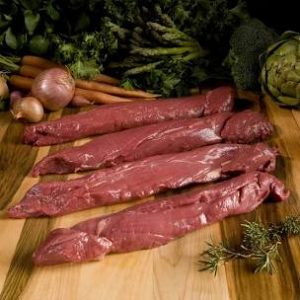 Sometimes I think that deer have calendars for the different hunting seasons. During bow season, I saw lots of deer where I hunt on a farm near Cuckoo, in Louisa County. Cuckoo Tavern is where Jack Jouett took off to ride a horse 40 some miles to Monticello to warn Jefferson that the British were coming.
Because Brother Ed was having some health issues, I spent a lot of time visiting him in the hospital and at re-hab during bow and smoke pole season, and did not get to the woods that much. I saw plenty of deer, but the closest one was 67 yards according to my range finder (Vortex 1300). That’s out of range for my Excalibur crossbow. I did take a deer with bow at 45 yards several years ago. I kept thinking – wait ’til muzzle loader season.
When muzzle loader season opened, the deer responded accordingly and came out to feed at 250-300 yards. My .50 caliber TC “Encore” will take them at that distance, but I don’t feel comfortable at that distance.
Some came within range, but were behind bushes, etc. One deer walked out of the cut-over and fed in my direction, but facing me and it got dark.
Both bow and black powder season came and went without my putting venison in my freezer. My hunting buddy, Greg Barlow (and his son, Terrell) supplied me with some backstrap (deer tenderloin). I will admit I did not hunt much. Can’t ever remember not tagging a deer during bow and black powder seasons.
Greg told me to continue going out and sooner or later I would hook up. My good friend, Todd Reardon, owns a farm in Cuckoo and has allowed me to hunt there for over 40 years. Todd lives in Ronan, Montana now -a former Louisa’n.
Last Tuesday, November 19, 2019, I went to my tripod stand around 3:00 PM at the farm in Cuckoo. Nothing for two hours. Unusual not to see anything. At 5:15 PM I observed a big-bodied deer emerge from the cut-over and into the bean field. Checked that bad boy out with a range finder – a big spike at 237 yards. I  had my Ruger .30-06 and he was within range, but one problem: he was feeding on the loose beans face-forward, facing me.  I squirted some powder in the air and wind was in my favor. When he got to 173 yards, he turned broad-side, profiling. Wrong move – for him. I was thinking, “Old boy, you are like Bad Man Jose in trouble plenty.” I had the .30-06 dialed in and had a good gun rest on rail of tree stand. Laid cross-hairs on “pump station”, but I have seen deer run 200-300 yards after a “boiler room” shot. It was getting darker, so I moved the cross-hairs up and to the right for a neck shot. When the Ruger roared, that spike dropped like a sack of potatoes. That was an older deer, and still a spike, he really needed to be removed from the gene pool.
Finally, backstrap for the family!

A Day To Remember

I am Jim Brewer, Editor of the new CvilleBuzz, a humble on-line attempt to entertain those, not only … END_OF_DOCUMENT_TOKEN_TO_BE_REPLACED