You are here: Home / Golfing for Duffers / Life From the Forward Tees 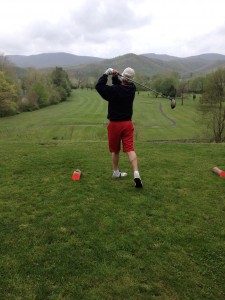 Men are not likely to stop and ask for directions, not are they inclined to play golf from the forward tees. Women don’t have these problems. They rely on their GPS or ask for directions, and they always play from the ladies tees. But on a golf course, men have choices. There are often 3 and sometimes 4 or even 5 tee boxes for men. The “way-back” tees, usually the black tees, which should be an omen, are reserved for the scratch golfers, tournament-type players who think every golf course should be at least 7,400 yards in length to provide a challenge. For me, a 5-foot golf course (as in a downhill putt of 60-inches) is enough of a challenge. But 90% of male golfers – no matter their handicaps – will select the “white tees”, the second longest on the course.

This column is an appeal for ordinary golfers to reconsider and try life from the forward tees. The rewards are significant: You’ll score better, your confidence will increase, you are less likely to try to crush your drives (you know what happens when you do that), and most importantly, you’ll speed up play for your foursome and all those on the course. And who wants to have to hit long irons or hybrids on the second shot of every par four hole?

Concerning my golfing skills, I am at best a weekend warrior, a duffer, as likely to shoot a 105 as in the low 90’s. But a couple years ago, I decided to get in a quick afternoon round at Meadowcreek, a wonderful course in the heart of Charlottesville.

I was going to play alone and maybe work on the weaker points of my game – driving, iron play, the short game and putting – everything else is okay. But approaching the first hole, I met two senior citizens. For the record, I am also a senior citizen, but these two fellows had their PhD’s in senior-ism. Age 80 for them had come and gone. They asked me to play with them, and I agreed. My ego is such that if I make a putt over 10-feet, I want witnesses.

They announced that they would play from the gold, or forward tees, but would wait if I hit from the back tees.

On the first hole at Meadowcreek, the forward tees are about 60 yards ahead of the whites. My mind did a quick calculation and allowed that if I hit an ordinary 175-yard drive, it would be the equivalent of a 235-yard blast from the forward tees.

“I’ll play with you,” I announced.

We all hit and I managed a decent drive, and it settled amazingly in the fairway.

“We’re playing with a pro,” they wheezed.

My second shot was one of the best of my life. I hit a hybrid shot onto the green. It actually took one of those little chunks out of the putting surface. I hit so few of those, I’m not sure what the word is, but I was on the green in two on a Par 5 hole. And I sank the putt for an eagle.

I can count on – well, my right pinkie finger – all the times I have got an eagle in my less-than-stellar golfing career. I was ecstatic, but was quickly brought down to earth when I topped my drive on Number 2 and it barely made it to the creek. But after that, I have looked at life from the forward tees in a more favorable light.

A golf instructor from Charlottesville once told me that the difference on a scorecard between hitting from the white tees as opposed to hitting from the back tees is “easily” 6 strokes, probably more.

That would also mean the difference on a scorecard between the whites and golds would also be 6 to 8 strokes. I don’t know about you, but I’d rather come in to the clubhouse, knock down a cool one and say I shot a 91 than fess up to a 103. And so what if it was from the forward tees? If I were Jim Furyk, I’d play from the back tees. But I’m Jim Brewer and I like to have fun on a golf course, not do penance.

And if you are a pretty good golfer, maybe able to break 80 on a good day, wouldn’t it be interesting to occasionally play a course on shorter terms? You’d hit more wedges and short irons for second shots and have frequent chances to lie two on a Par 5.

Next time you tee it up, try life from the forward tees. You may just like it up there, and I know it will speed up play and you’ll have more fun.

I am Jim Brewer, Editor of the new CvilleBuzz, a humble on-line attempt to entertain those, not only … END_OF_DOCUMENT_TOKEN_TO_BE_REPLACED