You are here: Home / Golfing for Duffers / Dear Ping 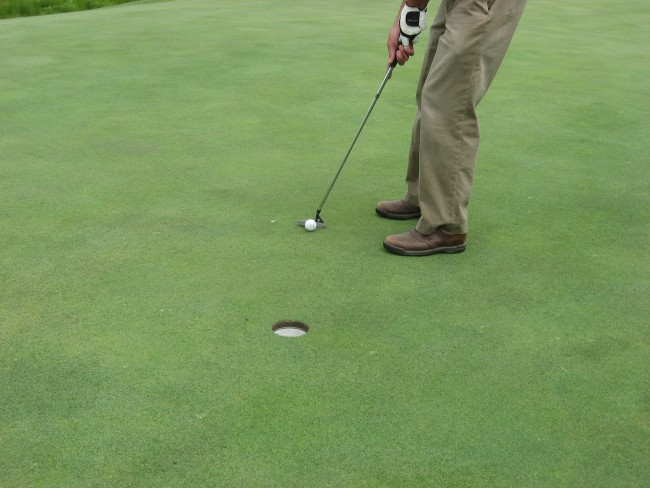 Okay, you Pingites or Pingatereans, whatever your names. You know who you are. You make some of the greatest golf equipment in the world. But I have a complaint.

This Christmas, my wife gave me a new Ping putter. It cost $149.95. I know this because the clerk put it in a box for her, sealed it up and forgot to take the price tag off. I’m leaving the tag on, though, because my first set of golf clubs, some bargain-basement Wilson’s, didn’t cost half that much. So I’m as proud of the price tag as I am of the new putter. My old putter, by the way, was an Acushnet that I bought in college in 1963. I think it was $9.95 at the time, which is the equivalent of $500 in today’s inflated dollars, so I know a thing or two about expensive equipment.

There was nothing really wrong with my old putter. The welder had actually been able to straighten the shaft after I wrapped it around a sycamore tree, but the only time it ever knocked balls in the hole was on gimmees. If you beg for gimmees, by the way, sometimes they’ll give you the five-footers. That was my best chance.

But now, equipped with a $149.95 putter, I figured I’d be able to teach Hank Haney a few thinks about lag putts and curling 50-footers. The day after Christmas I took it out to the range and putted a little on the practice green. Amazing! I was sinking 20-footers with regularity. Well, maybe not regularity, but I did sink one 20-footer that ricocheted off a previously putted ball. But it went in the hole! And this was just the first time I used my new putter. Things were looking up.

My complaint is what happened after that, when I actually went out and played a round with my evil golf partners – Satan’s three younger brothers. We had big money on our round – a dollar on the front and back and a dollar overall. I’d like to say I do my best when money is on the line. I’d like to say that, but it’s not true. Twenty-five cent Nassau gives me the dry heaves. But! But! With my new $149.95 Ping putter, the guys wouldn’t have a chance.

On the first hole, I was staring down a tricky 10-footer for my birdie, or maybe it was a double bogey. I can’t remember which. All the other guys had putted out and were now waiting for me as I circled the hole for the 7th time, then got down on my stomach to try grasp the subtle nuances of the undulating green.

So I lined it up, made a smooth backstroke, came forward and knocked it 7 feet past the hole.

So I two-putted the first hole, not bad. My complaint is that after 18 holes, this putter, this $149.95 putter, can’t read greens any better than my old one. Several times I left it 6-feet short, which is hard to do with a 12-foot putt, and once I knocked it 20 feet past the hole and into a greenside bunker. Damned those downhill putts! Overall, I was pretty bummed with the results.

But this is a warning, Pingites. I’m not going to send my putter back – this time, but you guys better get your act together soon. This spring I’m thinking about a new lob wedge!

I am Jim Brewer, Editor of the new CvilleBuzz, a humble on-line attempt to entertain those, not only … END_OF_DOCUMENT_TOKEN_TO_BE_REPLACED