You are here: Home / Eatin' Out / What a Floozie 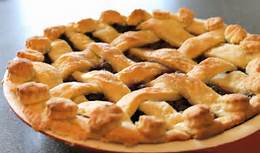 (Ed. Note. Everybody likes pies. Especially yours truly. I am, in fact, the president of a growing organization called “There is no such thing a bad pie” club. Anyway, a year or so back Sherman Shifflett wrote this piece on a pie shop out his way. It is worth reprinting.)

A couple of years ago the co-owners of Obrigado’s Restaurant in Louisa, decided to open a pie shop next to their Main Street restaurant.

Selecting an appropriate name for their pie shop was important. They considered “Sunny South”, among others, but that was too bland. They wanted a name that folks would remember, and came up with “Floozie’s” and the pie shop took off much faster than anticipated.

Debbie makes the pies and Jade manages the restaurant, Obrigado’s. Debbie said she has made as many as 25 pies in one day. Piecrusts and everything else are homemade.

I’m not saying that I am an authority on pies, but I know “good” when I eat it, and I can assure you Floozie’s makes excellent pies. Coconut crème is my favorite, but that sells out quickly and is not always available.

By adding breakfast, Floozie’s has attracted even more patrons. They serve a good breakfast and the atmosphere is very laid-back. It’s okay to get up and get your own coffee and even serve others who have empty cups. The blueberry pancakes are outstanding. They put cottage cheese in the grits and they are very good, but I’m not supposed to eat cottage cheese.

There was an article about Floozie’s Pie Shop in the Richmond Times-Dispatch back in March 2016, and apparently many readers noticed. One Saturday morning, Ava and I were in Floozie’s and struck up a conversation with a couple at the next table. They were from New Kent County and said they had driven up to Floozie’s three times for breakfast, and to pick up a pie.

Ava and I met another couple from Goochland County in Floozie’s for breakfast and have seen them several times.

For those wanting to try something different for breakfast, plan a trip to Floozie’s Pie Shop on Main Street in the town of Louisa, diagonally across from the courthouse. Try a slice of pie after breakfast. If you like it, take a slice or whole pie home.

Louisa is about 45 minutes from Free Bridge in Charlottesville. From Rt. 208 in Louisa, turn left at the traffic light on Main St. and go a couple of blocks. There is parking on Main St. or around the courthouse. Additional parking is available on Church Street.

I am Jim Brewer, Editor of the new CvilleBuzz, a humble on-line attempt to entertain those, not only … END_OF_DOCUMENT_TOKEN_TO_BE_REPLACED