You are here: Home / Eatin' Out / Miller’s: Nags Head’s Finest 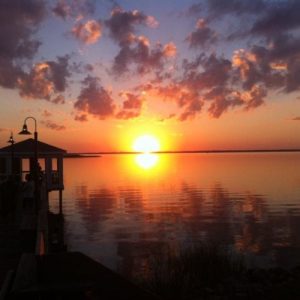 There are scads of great restaurants in Nags Head. If they weren’t great, they wouldn’t survive because of all the competition. As of last weekend, though, Miller’s Waterfront Restaurant is our choice as the best of the best.

When they say waterfront, it’s waterfront. Any closer and your feet would get wet. Nancy wanted to see the sunset over the Roanoke Sound on her birthday evening. She also wanted to eat out, so it was Miller’s. I had eaten there maybe 20 years ago and it was good, but since then, Miller’s has expanded, offering new choices, a great menu and it was beyond delicious.

In 2011 Hurricane Irene blew through Nags Head and nearly destroyed Miller’s. The wall and floor facing the sound fell in the water. They rebuilt and added the Waterfront Sunset Bar & Grill upstairs – featuring delicious cocktails, a wide selection of craft beers, a full menu of creative casual fare, and the best views in Nags Head. The restaurant on the main level expanded outward with an inviting porch and that’s where we ate. It was a lovely evening and the sunset did not disappoint, nor did the excellent singer/guitarist who entertained on the lawn with live music.

I ordered Fried Green Tomatoes as an appetizer and that was probably a mistake. They were so scrumptious I ate all but one and was nearly full when my platter of Fried Shrimp arrived. Nancy ordered the She Crap Soup and said it was the best ever – that there was as much crab meat in the bowl as soup. Her Fried Oysters entrée completed an outstanding dinner.

Miller’s a family-owned restaurant has been in business since 1982. They are located at Mile Post 16, Rt. 158 in Nags Head. Call them at 252-441-6151, but they do not take reservations.
Two other places come to mind in the eating department. One is O’Neal’s in Wanchese. It was closed when we went to check it out but several of my friends say it offers the best lunch on the East Coast. It’s also a wholesale seafood operation and it’s likely that you are eating seafood caught that very morning. They are open only for lunch, however.

Another must-visit spot is Scammell’s Corner Ice Cream Store at 6406 Virginia Dare Trail, the beach road in Nags Head. Linda Morris, knowing Nancy’s love for good ice cream, had recommended it and Nancy loved it. For $4.95 she got an entire pint of hand dipped ice cream, Strawberry with real strawberries and Vanilla/Walnut. She ate every speck. Their ice cream is the best, she says.

So – lots of good restaurants and eateries in Nags Head, but by all means give Miller’s Waterfront Restaurant a try if you haven’t eaten there in a while.

I am Jim Brewer, Editor of the new CvilleBuzz, a humble on-line attempt to entertain those, not only … END_OF_DOCUMENT_TOKEN_TO_BE_REPLACED