You are here: Home / Conservation / Saving our Shrublands 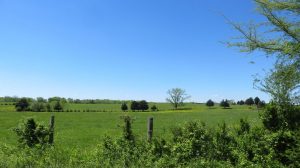 We are rapidly losing our meadows and shrublands. We certainly don’t want to lose meadows, with all those nice wild flowers and natural flora, but who really cares if we lose shrublands?
Millions of plants and animals, that’s who. The Virginia Game Department is doing what it can to educate about shrublands and their endangered status. Here are some interesting observations as supplied by VDGIF

Shrublands are open habitats that contain small to medium-sized woody plants, generally under 15 feet in height.  In some habitats, such as open cow pastures, shrubs can be few and scattered. In others, such as clear-cuts after a few years from harvest, they can be abundant and widespread. Additional shrubland habitat in Virginia can be found in abandoned fields, restored strip mines, shrubby wetlands, vegetated fencerows and even in your back yard.

If left unmanaged by humans, or undisturbed by natural events like storms or wildfires, shrublands will continue to grow over time and eventually revert to forest. This can present a problem for the birds that depend on them, as their habitat can disappear in just a few years. However, rural Virginia still has an abundance of shrublands in need of preserving.

The number of bird species found in shrublands during the breeding season is truly impressive. Step into a shrubby pasture to be greeted by the ping-pong trill of the Field Sparrow, while the song of the Eastern Towhee invites you for tea and the Eastern Kingbird sounds off like electric sparks spritzing from a live wire.

Perhaps you’ll spot a brightly colored Orchard Oriole, Northern Cardinal and Blue Grosbeak, or, if you’re lucky, a Loggerhead Shrike as it hunts from its favorite perch.

Joining the shrike are Kestrels and Bluebirds, perched on trees and electric lines while scanning the ground for prey, as Barn and Tree Swallows forage overhead.  Mockingbirds, Thrashers and Catbirds all make their home in shrublands, as do Indigo Buntings and White-eyed Vireos.  Looking for Warblers?  Yellow Warbler, Prairie Warbler, Common Yellowthroat and Yellow-breasted Chats are all widespread shrubland denizens.

In shrub habitats in western Virginia you’ll find handsome Chestnut-sided Warblers and, under the right conditions, less common species like Golden-winged Warbler and its cousin, the Blue-winged Warbler.  While searching for these western shrub specialists, keep an ear out for Willow Flycatcher. East of the Blue Ridge?  Listen for the iconic whistle of the Northern Bobwhite.

The list of species breeding in or otherwise using shrubby habitats goes on.  In addition, shrublands abut other habitat types, often including woodlots and forests.  A visit to a shrubby patch will likely yield additional species associated with forest edges and forest interior habitats.

Shrublands and all the creatures that call them home, indeed, need our attention and preservation efforts.

I am Jim Brewer, Editor of the new CvilleBuzz, a humble on-line attempt to entertain those, not only … END_OF_DOCUMENT_TOKEN_TO_BE_REPLACED