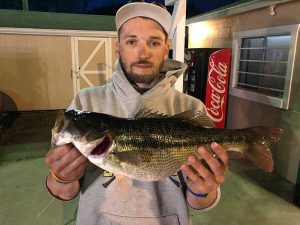 On New Year’s Day,  Clifton Joel Hamilton caught a 4-12 spotted bass at Claytor Lake, a state record for this species.

A spotted bass looks almost exactly like a largemouth bass, except the mouth is smaller and it’s full of teeth.

For several years now, we have been fishing at Lake Norman near Charlotte at family gatherings and caught bass from the dock that were almost like largemouth, but now quite. We noticed a slightly smaller mouth and the fact that they were much harder fighters, more so than even a smallmouth.

It turns out they were spotted bass, native to the Catawba River.

Spotted bass average 1 to 2 pounds, so Hamilton’s catch was a true trophy.

Occasionally, spotted bass will hybridize with smallmouth and a hybrid species occurs. But Hamilton’s fish was a true spotted bass and, as such, a new Virginia record.

Looking for Antlers In All the Right Place

I am Jim Brewer, Editor of the new CvilleBuzz, a humble on-line attempt to entertain those, not only … END_OF_DOCUMENT_TOKEN_TO_BE_REPLACED