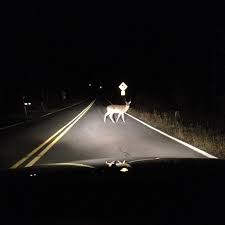 It’s hard to drive 5 miles without seeing a crumpled up, dead deer along the side of the road. That’s because we are in peak season – the deer are in rut. Bucks are chasing does and they run across roads after the enticing females and worry about cars and trucks later.

Some say to watch out for deer in the headlights, but I say just watch out.

Recent studies say that Virginia is now the 11th state in the country where drivers are most likely to hit a deer. In fact, there is a 1 in 94 chance that your car and a deer will have a little get-together. In neighboring West Virginia, the odds are 1 in 43.

Sometimes, there is absolutely nothing you can do to avoid a deer collision. They run right into you with no warning, but there are a few precautions you can use to reduce that likelihood.

I have never hit a deer with a car (knock on wood) and here are a few things I have done over the years to improve my chances.

First, if you are driving and see a deer anywhere, that means they are moving, either feeding or they are active. That’s a red flag. Slow down. Deer always seem to move at the exact same time. I think it has to do with the moon phases and pressure systems, but that’s what they do. They all move at the same time, increasing the odds of a collision

If I am in a likely place for deer to cross the highway, I move to the left lane if there are two lanes in my side of the road. That gives me more visibility and reaction time. If I’m on a two-lane road, I inch left towards the centerline. Every little bit helps.

Ultimately, if a deer jumps out in front of you, don’t wreck the car to avoid hitting the animal. Just maintain control, slow down as much as possible and brace for impact. Also, never slam on brakes because if you do, the car lurches forward and down, making is more likely that an animal would crash through your front windshield. A deer bouncing off a fender is bad enough but having one land in the front seat beside you is a different matter.

For the next few weeks, drive as if you expect a deer to run out in front of your car.

Good luck! You may need it.

I am Jim Brewer, Editor of the new CvilleBuzz, a humble on-line attempt to entertain those, not only … END_OF_DOCUMENT_TOKEN_TO_BE_REPLACED