You are here: Home / Conservation / Bats Out Of….. 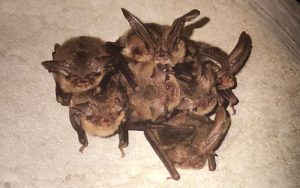 Poor old bats. Just because they suck blood and look like a Mini-Me Bela Lugosi, people don’t like them. In fact, many are highly fearful of bats, while in fact, bats are among the neatest creatures on the planet.

This being Halloween season and all, the Department of Game and Inland Fisheries reminds us that this is Bat Week and CvilleBuzz is all over it. Here are some interesting bat facts according to VDGIF.

For example, did you know that the fruit bats of the tropics play an important role in pollination and seed dispersal of the many fruits and nuts we eat on a daily basis? The insect-eating bats of temperate zones are major predators of night-flying insects and help keep insect populations in check.

Bats are mammals, like us. They bear their young live, they feed their babies milk and they grow hair. Bats are the only mammal capable of sustained flight.

Bats belong to the order of Chiroptera which means “hand wing”. That’s because a bat wing is actually half arm and half hand. Because a bat can move each finger independently, their flying skills rival those of birds. A bat can hover in place, fly backwards, stoop, dive and roll as needed. All of these maneuvers may be necessary when pursuing a highly evasive moth.

Insect-eating bats make up the majority of the bats in North America. They have small eyes, large ears in proportion to their heads, pug-like faces and are generally small, with wingspans less than two feet. Most of these bats feed on insects and use echolocation to find their prey. These bats are major predators of night flying insects and make a great natural insecticide. Some of these creatures can eat up to 3,000 insects in one night. If you picture several of these bats feeding in your backyard, you can imagine your insect problem being “gobbled up” rather quickly.

Finally, all Virginia bats navigate by echolocation (sonar) to find food. By emitting a high frequency pulse that travels out and bounces off an object and then returns to the bat, they are able to determine distance, size, and direction of the object.

Most of the sounds are emitted through their mouth, but bats can emit sounds through their noses. Their ears are sensitive enough to detect slight differences in the time required for an acoustic pulse to return to each ear – this difference tells the bat the direction of the object. Similarly, the time required for an echolocation pulse to return tells the bat how far away the object is.

If they are chasing a moth for dinner, they will increase the number of pulses emitted as they get closer to their prey. This provides the bat with detailed information on direction and distance to the prey. This is very important when a bat is chasing a moth that is in an evasive maneuver, not wanting to become dinner!

Bats are amazing! They deserve our admiration and our protection.

Where There’s a Will

I am Jim Brewer, Editor of the new CvilleBuzz, a humble on-line attempt to entertain those, not only … END_OF_DOCUMENT_TOKEN_TO_BE_REPLACED