You are here: Home / Columns to Remember / Blacksnakes and Copperheads 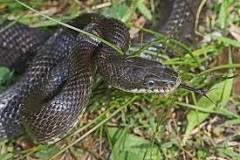 Last week I ran an article on water snakes written byJ.D. Kleopfer, an expert in snake-ology. Basically, he said there are no cottonmouth moccasins in Central Virginia. They all live near the coast. Yet, everyday someone will see a water snake and swear it was a cottonmouth. Black snakes are another species that are misunderstood.

We once had a small cottage on a lake in Greene County. Beside the house, I kept a wood pile. One day I lifted a board and was greeted with a very large black snake. Someone once told me that the reason a black snake was around  was precisely the same reason you would want him around. In this case, the snake was there to eat mice and we had lots of them sneaking in our cottage. So I left him alone and soon – no more mice.

Yet, people see a black snake and kill it just to kill it. Black snakes are harmless, unless you foolishly put your hand directly in front of his mouth, begging for trouble, in which case he would bite the fool out of you. But they are not poisonous and would much prefer to slither away than stand and fight.

I have also heard that black snakes are enemies of copperheads and will chase them away, since both are fond of rodents and amphibians and compete for the same food. I don’t know about you, but I had much rather have a black snake in my wood pile than a nest of copperheads.

Copperheads, while poisonous, rarely deliver a lethal strike. I read once that if you were in the mountains, brook trout fishing, and got bit by an ordinary copperhead, you could fish your way back to the car and take your time going to the ER for a shot of anti-venom. For many, a copperhead bite is not much worse than getting stung by a bunch of angry yellow jackets.

Copperheads, however, are a nuisance and somewhat of a threat if they are around the house. Children and pets are at risk. So if I see a copperhead in my yard, it’s “off with his head.”

Blacksnakes, however, are always free to come and go.

I am Jim Brewer, Editor of the new CvilleBuzz, a humble on-line attempt to entertain those, not only … END_OF_DOCUMENT_TOKEN_TO_BE_REPLACED