You are here: Home / Chuckles / A Garden Full of Fish 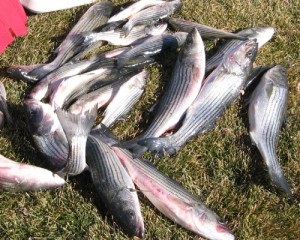 On a December morning many years ago – I suppose it was around the time Richard Nixon was suggesting that 18 or 20 minutes be erased from his Presidential tapes – a half dozen of us rose before dawn to drive and meet a charter captain at Callao for a fishing trip on the Chesapeake Bay. As I recall, we had our first Bloody Mary before we got to Richmond and had deplenished our entire bottle of vodka by the time we met the good captain. That’s when we got into the beer.

By the time we set out our lines, all aboard were in good spirits and were catching fish. Did we ever catch fish. This was back before there were any limits on stripers or bluefish and we hammered them. Some of us also got hammered. Two men were down by noon and another two faded out about the time we hit the docks at 4 PM with well over a hundred fish on board. The two of us who could, loaded the fish into two trash cans and headed back home. Arriving about 9 PM, my lone standing comrade confessed that he wanted no part of fish cleaning, nor did the others. As a result, I became the sole possessor of the entire catch. That night, I cleaned fish and I cleaned fish. It was three in the morning when I finished and put the last fillet in the freezer, but I still had a small problem of disposing all the carcasses. If I had put two trash cans of dead fish parts out on the street, my trash man would have cut me off permanently, so I had to resort to Plan B.

I had a shovel and a small vegetable garden, so I dug a shallow trench for the fish parts, covered them up and forgot all about them until one day in early March when my friend, Donald, bought his new bird dog over to meet my dog, Prince.

Donald’s setter, Cotton, had just been bathed and groomed. She was primed for a showing at the Westminister Kennel Club, while my outside and perrenially-penned dog was muddy and grungy. I let Prince out of the pen and he and Cotton sniffed each other thoroughly before scampering about the yard. Donald and I were chewing the fat and not paying much attention to the dogs until I noticed Cotton rolling around in my vegetable garden.

And then I remembered. The fish parts. It had been a fairly cold winter and the fish were just beginning to break down and decay. They were, in fact, in an early stage of rottenness as Cotton rolled and rolled and rolled some more.

Donald then noticed his once immaculately groomed dog trotting up the hill. You could see the green and purple fumes rising from her now tarnished fur. We smelled her about 15 yards before she reached us. It was nasty.

Later that morning, I hosed Prince down and put him back in the pen. I’m not sure Donald ever got all the stench off of his dog. I know that he never brought her over again for a visit.

It was then I made a mental note. The next time I buried a hundred fish in my garden, I should perhaps dig a deeper trough. But I must admit, I had one helluva vegetable garden that season. You should have seen the tomatoes!

I am Jim Brewer, Editor of the new CvilleBuzz, a humble on-line attempt to entertain those, not only … END_OF_DOCUMENT_TOKEN_TO_BE_REPLACED