You are here: Home / Boomer Memories / What Did You Say? 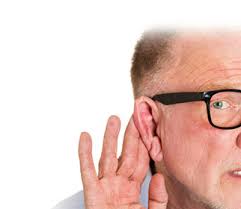 If you live long enough, two things will happen. First, you’ll get arthritis as old joints begin to wear out. It’s like an automobile engine at 250,000 miles when it’s metal on metal, but in our case, it’s bone on bone. The second thing that will happen is that your hearing will also begin to diminish. Either that or it’s that other people all begin to mumble at exactly the same time.

Ears have a life expectancy of about 65 years. After that, anything you can hear is a bonus. As far as I know, there are no exercises one can do to promote better hearing, other than keeping sharp objects out of contact with things like the malleus, stapes and incus bones – I remember those from 10th grade biology.

Once you reach 65, you notice that everybody in a crowded restaurant makes unintelligible sounds, especially with music and loud conversation in the background.

That’s when my wife Nancy will say something like “Mrffus-garble-blur-sars”, just under her breath

“I said the muffins are great with the butter sauce, what did you think I said?” My wife now responds, this time at a decibel level worth listening to.

“That’s what I thought you said. Just checking,” I respond.

Wives don’t seem to lose hearing quite as soon as men. That’s because they have a certain degree of “mother hearing” left over from the days when teenage children tried to sneak back in the house undetected after curfew. Forget it kids, you’re grounded.

In our house, we never needed electronic listening devices in the nursery. My wife could hear the faintest whispers through three lead walls. She was like Superman with X-Ray vision; only in her case it was X-Ray hearing.

I’d be watching the NCAA finals on TV in the den with the crowd screaming at the top of their lungs and she would say, “I think I heard the baby burp?”
A baby burp? Now that’s mother hearing for you.

Particularly irritating for us Boomer Geezers is when our wives say, “Did you hear that?”

How the hell would we know what she heard? Was it a spacecraft landing in the backyard? A burglar in the basement? A tree falling in the forest?

What, for God’s sake, did you hear?

“I think I can hear the neighbor’s faucet dripping in their back yard,” she’ll say.

There must be something about giving birth that makes even old ears extra sensitive. But I was in the delivery room once and didn’t pass out! That’s something!

Maybe that’s why I still don’t need a hearing aid!

Mom, Can I Lick the Beater?

I am Jim Brewer, Editor of the new CvilleBuzz, a humble on-line attempt to entertain those, not only … END_OF_DOCUMENT_TOKEN_TO_BE_REPLACED